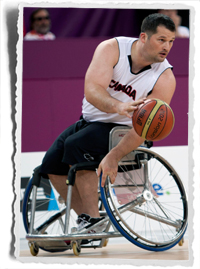 (LONDON) Canada has landed a date with host Great Britain in the semifinals of the London 2012 Paralympic Games after delivering a gritty 77-51 quarterfinal victory over Spain on Wednesday.

Canada led by as much as 18 points in the first half and converted eight points off of turnovers through two quarters. The game got increasingly rough in the second half, but the Canadians maintained their exposure and outscored their opponents in the fourth quarter 20-10 to seal the victory. Spain did everything they could muster to ensure Canada worked for their baskets with most of Canada’s points coming from down low. They scored 54 of their 77 points from inside the paint and 17 second chance points.

Once again Patrick Anderson, of Fergus, Ontario, pointed the way with a double-double (16 points and 14 rebounds). He also added six assists. Joey Johnson, of Winnipeg, Manitoba, posted his best offensive numbers of the tournament so far with 15 points and five rebounds, while Wonowon, BC’s Bo Hedges accumulated 14 points.

All in all, ten different players scored for Canada in what Hedges called a “good team effort.”

“It is just a commitment by everybody for the last two years to train and to rely on one another, to believe in one another that we can all put the ball into the hoop and make the extra passes and everybody finishing.”

“It is a lot to do with trusting one another, being confident in one another and making that extra pass to the open guy and seeing that,” said Hedges.

Canada heads into the semifinal with a 4-0 record against Great Britain over the course of the previous four Paralympic Games including a 70-54 win in the preliminary round on day two of competition at the London 2012 Paralympic Games.

The semifinal match versus Great Britain, will be played in front of a sold out crowd at the North Greenwich Arena on Thursday September 6th at 9:15pm BST.

“It’s going to be a home crowd again, anything is possible. They have some huge players. You can’t let them get going, if they start rolling it’s hard to stop that train. You can never underestimate a home side, that’s the sixth man they have right there,” said Tyler Miller of Kitchener, Ontario, who had two points.