Canada Falls to USA, Netherlands Improves to 2-0 at Toronto Challenge 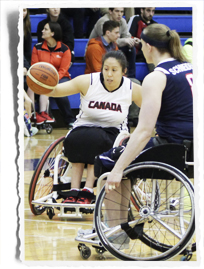 (Toronto, Ont.) The Netherlands and the USA both improved to 2-0 at the Toronto Challenge on Thursday, while the hometown Canadians and the Brits are still in search of their first wins in women’s wheelchair basketball competition at the Mattamy Athletic Centre.

Canada and the USA added another chapter to the rivalry as both clubs battled in a close opening half. The Americans had the edge at halftime, up 36-29. After pulling to within three points, the Canadians hit a wall on both sides of the ball and the Americans widened the gap by outscoring Canada 37-25 to close out the game. The final score was 73-54 in favour of Team USA. American Rose Hollermann led all players with 36 points, while Cindy Ouellet was the top point producer for the Canadian side with 13 points.

The Netherlands cruised to a 74-54 win against Great Britain in the late game on Thursday. The Dutch attacked proved to be too much to contain, as the reigning Paralympic bronze medalists secured their second win of the tournament. Mariska Beijer produced 31 points for the Netherlands, while Helen Freeman scored a team-high 21 points for Great Britain.

Canada and Great Britain will attempt to regroup when they meet at 6:15 p.m. ET on Friday, while Team USA and the Netherlands will put their flawless records on the line when they tip off at 8:30 p.m. ET. Action continues through to Sunday at the Mattamy Athletic Centre. All games are open to the public.