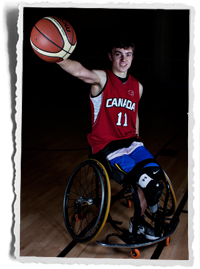 (Mexico City, MEX) Team Canada soundly defeated Venezuela 73–38 on Thursday to complete the round robin with a perfect 3-0 record at the Men’s U23 Americas Zone Qualification Tournament in Mexico City. The two teams meet again in the semi-final at 16:00 (CST) on Friday with the winner earning a berth to the World Championship in September.

With Canada already assured of first place in the preliminary round prior to the match against Venezuela, all 12 players saw game action in a variety of line combinations. With a balanced offensive attack, 11 of 12 Canadians hit the scoresheet with Nik Goncin and Mitch Bossaer leading the way with 14 points each.

Venezuela initially had the lead early in the first quarter by a 10–8 margin. Then Canada scored the next 7 points to end the quarter at 15–10 and never trailed again. Canada held a close lead of 30–21 at half time, as Venezuela stayed within striking distance with some very hot shooting.

Canada’s stifling defence shut the opposition down in the second half and some full court pressure by the Canadians put the game well out of reach as the lead stretched to 55–28 by the end of the third quarter. Canada cruised through the final quarter as Venezuela’s shooting cooled off and their fouls caught up to them, allowing Canada to convert 13 points from the the free throw line.

The other game saw Mexico easily handle Brazil by a score of 69–46. These two teams will face off again in the second semi-final on Friday. The winner of that game will also punch their ticket to the World Championship in Turkey. The United States has pre-qualified for the World Championship and owns the third and final spot for the Americas Zone.