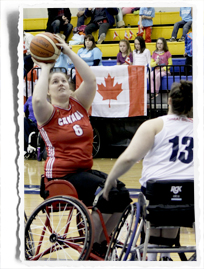 (Toronto, Ont.) The Canadian Senior Women’s Wheelchair Basketball Team got on the board in the win column on Friday night with a victory over Great Britain, while Team Netherlands remains undefeated in Toronto Challenge action at the Mattamy Athletic Centre.

Canada picked up its first win in the opening game of the night by defeating Great Britain 47-41. Both teams got off to a slow start but the Canadians rounded into form in the second quarter to take a 25-16 lead into halftime. The British erased the deficit in the fourth quarter to close the gap to two points in the last minute of play. Canadian Cindy Ouellet shut down the comeback attempt by hitting four consecutive free throws to close out the game.

Ouellet led the Canadians in scoring with 12 points, followed closely by teammates Katie Harnock with 9 points and Amanda Yan and Arinn Young with 8 points, respectively. Amy Conroy paced the British offence with 13 points while Katie Morrow had 12 points.

The Netherlands outlasted the United States 61-45 in the second game of the night. The Dutch were up 29-18 at halftime and maintained control of the game until the final buzzer. Mariska Beijer tallied a game-high 27 points on behalf of the Netherlands, while Desiree Miller topped all Team USA players with 20 points.

Canada will take on the undefeated Netherlands at 6:15 p.m. ET on Saturday, while the United States and Great Britain will tip off at 8:30 p.m. ET. Action continues through to Sunday at the Mattamy Athletic Centre. All games are open to the public.