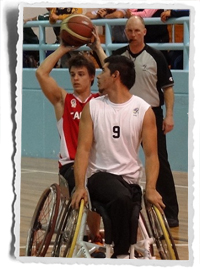 (Mexico City, MEX) Team Canada remains undefeated at the Men’s U23 Americas Zone Qualification Tournament after posting a hard-fought 62-56 victory over host Mexico on Wednesday. With the win, Canada secured first place in the round robin portion of the tournament.

The atmosphere in the gym was electric with a strong and very loud show of fan support for the Mexican side. Canada came out flat to start the game and struggled to find its rhythm offensively. Meanwhile, Mexico established a solid inside shooting presence and fortunately for the Canadians, many of the attempts did not convert. Mexico led 14-13 after the opening quarter.

Team Canada Head Coach Steve Bialowas juggled his lines in an attempt to find some chemistry as 11 players saw game action in the first half. The moves paid off as Canada delivered a strong offensive showing in the second quarter to take a 32-28 lead into halftime.

As good as the Canadians were in the second quarter, the Mexicans were not to be outdone in the third frame. Mexico found its shooting touch and outscored Canada 20-11 to take a 48-43 lead into the final quarter.

The momentum carried over as Mexico stretched the lead to 8 points early in the fourth quarter, but Canada maintained its composure under trying circumstances and began to claw back into the game. Canada regained the lead halfway through the quarter and, following one more lead exchange, the Canadians held on until the final buzzer. Two of Mexico’s top players fouled out late in the game, making it even more difficult for the team to erase the deficit. Canada’s stingy defensive play limited Mexico to merely 8 points in the final frame.

The first game of the day saw Brazil defeat Venezuela by a score of 78–21. A very young and inexperienced Venezuelan team was no match for the Brazilians who were out to put on a better showing than in their opening game against Canada. With the win, Brazil secured third place in the round robin, while winless Venezuela placed fourth.

Each team will play a final round robin game on Thursday, with Canada facing Venezuela at 16:00 (CST) and Brazil taking on Mexico at 18:00 (CST). Each game will be a great preview of the semi-final match ups on Friday. With Canada’s 2–0 record, they have assured themselves of first place in the round robin and will face Venezuela in the 1 vs. 4 semi-final. Brazil and Mexico will meet in the 2 vs. 3 semi-final match. The winners of the two semi-final games on Friday will not only play for the gold medal but also assure themselves of a spot at the 2013 Men’s U23 World Championship in Turkey in September.