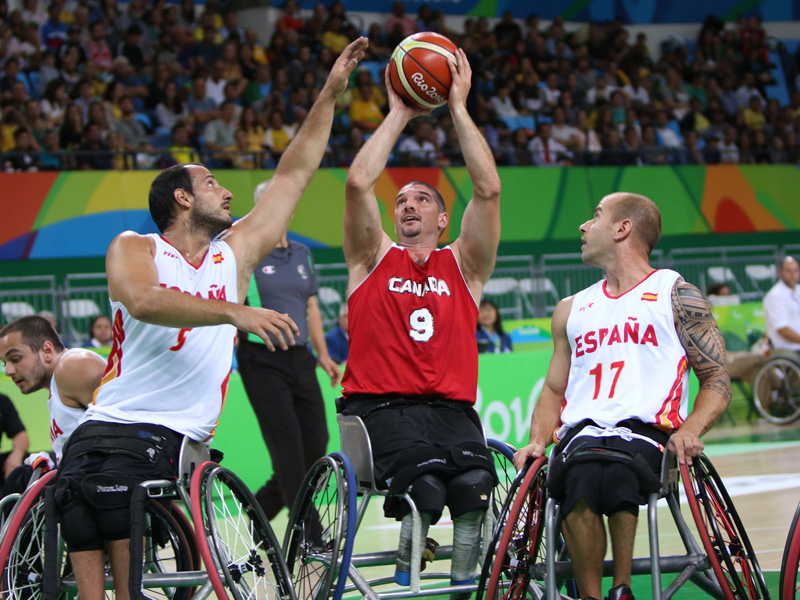 (Rio de Janeiro) The Canadian men’s Paralympic wheelchair basketball team fell 80-46 against Spain in men’s group A action on Thursday night at the Carioca 1 Arena at the Rio 2016 Paralympic Games.

“We didn’t play our best defense and I think we learned a lot of things that we know we have to tighten up,” said Team Canada player and Calgary native Chad Jassman. “Spain is a really good team out there, but obviously we are not happy with that performance. Offensively we need to get clicking more and move the ball around a little more. Defensively we have to find those edges a little more and find ways to make more chair contact.

“We’ve got to keep our head up. It’s a really long tournament. It’s a war not a battle. So we have to keep our heads up for the next game and come out as if it’s the first one. We can learn from what we did wrong this game and figure out our stuff for next game.”

Canada opened the game with the hot hand of Regina native Nik Goncin dropping back-to-back three-pointers to give the Canadians a 6-4 lead. Spain responded with a 12-point run en route to a 20-11 lead after one quarter of play. Canada struggled to find the basket in the first half, while the Spanish attack was firing on all cylinders. Spain led 43-20 at halftime.

Spain continued to pull away in the second half and finished the contest with a 53 per cent shooting percentage from the field. Canada shot 26 per cent from the field. The Spanish players used their height to dominate the boards and forced Canada to repeatedly turn over the ball.

The Canadian men (0-1) will aim to rebound in their second game when they face the Netherlands (0-1) at 6 p.m. BRT on Friday.

“It’s good to get the first one out of the way,” said Team Canada’s Janet McLachlan. “It was such a build up to this point and it feels good to win and to have that first game under our belts, build a bit of confidence and move forward from here.”

McLachlan, of Vancouver B.C., led the Canadian side with a double-double on the strength of 21 points and 22 rebounds. Cindy Ouellet, of Quebec City, Que., had 14 points, while Donkin N.S. native Jamey Jewells tallied six points. Helen Freeman and Amy Conroy both posted a team-high 14 points for Great Britain.

The opening match was an intense back-and-forth contest with six lead changes. Neither team’s offence could seize momentum, setting up a strong defensive match.

Both teams traded the lead early with Canada narrowly edging the Brits 14-12 in the opening quarter. The trend continued in the second and third frames, with Canada holding a one-point lead, 25-24, at halftime and a 35-32 advantage after three periods.

The scoring dried up in the fourth quarter. Great Britain struggled to hit their shots down the stretch, shooting just 1-for-15 in the final period, while Canada pulled away to capture their first win at Rio 2016. On the whole, Canada shot 34 per cent from the field, compared to 27 per cent by Great Britain.