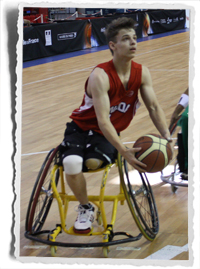 (Adana, Turkey) Canada fell short in their bid to advance to the semifinals at the 2013 Junior World Wheelchair Basketball Championship Thursday when they found themselves on the wrong end of some terrific first half shooting by Sweden which ended in a 71-66 quarterfinal victory for the Swedes.

Canada will now play two more games to decide 5-8th place with their first challenge coming against Turkey at 4:45 p.m. local time (9:45 a.m. EST) in front of a boisterous Turkish crowd that has been consistently energetic throughout the tournament.

“We asked our guys to play a full 40 minutes and they did just that. Canada came into this game as an underdog and every country in the world now knows that Canada has a solid team that doesn’t back down,” said Team Canada Head Coach Steve Bialowas.

Spurred on by four of their starters shooting at close to 60% accuracy in the game, and all reaching double digits in scoring, Sweden found their groove early on racing out to a 21-15 lead in the first quarter. They stretched the lead to as much as 14 points in the second quarter outscoring Canada 22-17 in the frame.

The Swedes continued to hold the hot hand outshooting Canada 55.9% to 46.5% on the game, but with some keen adjustments on defense at the break Canada limited their opponents to just 28 points in the second half. Led by a colossal performance by Nik Goncin, of Regina, Sask., who posted a monstrous 40 points and 12 rebounds, Canada began mounting a comeback with just over four minutes to go in the second quarter. Philippe Vermette, of Sherbrooke, Que., stole back some momentum for Canada when Goncin dished him the ball on a fast break that resulted in two of his eight points on the day. Vermette also finished with a team-high seven rebounds. Goncin proceeded to take things into his own hands scoring the next three baskets as part of an eight point run for Canada.

The teams exchanged baskets for awhile in the second half before the floor seemed to tilt in Canada’s favour when Goncin delivered a clutch three-pointer to end the third quarter and followed it up with a basket and an assist to start the fourth quarter. Moments later Vermette dropped Canada’s fourth consecutive basket to bring the Canucks within three points (56-59). Sweden did not make their first basket until midway through fourth quarter, but in the end that’s as close as Canada could get before the clock ran out.