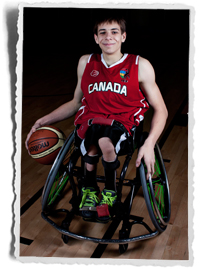 (Mexico City, MEX) Team Canada is going to the 2013 Men’s U23 World Wheelchair Basketball Championship in September. Canada punched its ticket to the main event with a convincing 79-42 win over Venezuela in the semi-finals at the Americas Zone Qualification Tournament in Mexico City on Friday.

Canada took the early lead in the opening quarter and stretched it to a 22-10 margin by the end of the frame. The offense was firing on all cylinders in the second quarter for Canada, as nine players hit the scoresheet en route to outscoring the Venezuelans 31-10. Canada led 53-20 at the half.

With a healthy lead, Canadian Head Coach Steve Bialowas played a variety of line ups well below the maximum allowance of 14 classification points on the floor. Canada showcased its depth and outscored Venezuela 16-8 in the third quarter before cruising to victory.

All 12 Canadian players saw court time and all converted on the scoresheet. Nik Goncin led the way for Canada with 19 points, teammate Vincent Dallaire chimed in with 10 points, and Eric Voss and Kevin Wakeling each tallied 8 points.

Canada will face host Mexico in the gold medal game after the Mexicans defeated Brazil 64-33 in the other semi-final contest. With the victory, Mexico also qualifies for the World Championship.

Brazil and Venezuela will collide in the bronze medal match at 16:00 (CST) on Saturday. The gold medal game will follow at 18:00 (CST).

The 2013 Men’s U23 World Championship is set for September 12-22, 2013 in Adana, Turkey. Canada, Mexico and the United States are the three qualifying teams from the Americas Zone.