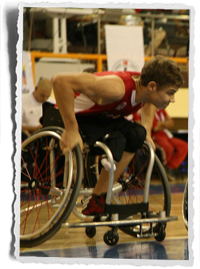 With the win Team Canada improves its record to 2-2 heading into the final day of preliminary round action Wednesday, after which the quarter-final match ups will be set.

“We defeated Mexico twice at the qualification tournament in March and that gave us confidence in the game today,” said Team Canada Head Coach Steve Bialowas. “They played us very tough, as we knew they would. We survived a difficult first quarter and, even giving up the lead late in the game like we did, our resolve never wavered.”

“We survived a difficult first quarter and, even giving up the lead late in the game like we did, our resolve never wavered.”

Nik Goncin, of Regina, Sask., was an offensive juggernaut for Team Canada as he tallied a game-high 35 points, 15 rebounds and six assists. Teammate Kevin Wakeling, of Cambridge, Ont., added eight points including a pair of key baskets down the stretch. Newcomer Liam Hickey, of St. John’s, N.L., also delivered a strong game for Canada with six points, nine rebounds and one assist.

The opening quarter saw both teams come out shooting in an attempt to seize the momentum early. Once the dust settled, Mexico held the early edge 21-18 after ten minutes of play.

The America’s Zone rivals traded baskets early in the second quarter before Canada rallied down the stretch to outscore Mexico 20-10 in the frame and take a 38-31 lead into halftime.

Mexico slowly chipped away at the Canadian lead. With less than five minutes to go in the game, Mexico pushed back to regain a one-point lead, 58-57, for the first time since the second frame. With the game on the line, Wakeling delivered some clutch shooting for Canada in the dying minutes of the game to restore the lead to three points and secure the win.