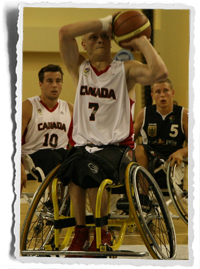 (Adana, Turkey) Turnovers proved costly for Canada as they were ousted 68-45 by Germany on day three of the Junior World Wheelchair Basketball Championship in Adana, Turkey.

Canada’s second loss of the tournament leaves them with a 1-2 record heading into action Tuesday were they will face a familiar foe with an identical record in Mexico – a team they defeated twice in the Americas Zone qualification tournament which earned Canada a berth into the World Championship.

“It’s a disappointing loss but we played a tough game against a very competitive German team,” said Team Canada Head Coach Steve Bialowas. “After some lessons learned from today’s game we will regroup and bring our best effort tomorrow in a pivotal contest against Mexico.”

“We will regroup and bring our best effort tomorrow in a pivotal contest against Mexico.”

However the Canucks could not keep pace with their German counterparts who leveraged Canada’s 21 turnovers to propel four of their starters into double-digits in scoring.

At the end of the first quarter Canada trailed 16-10 and could never quite find their stride. The game remained relatively close with the German lead swelling only slightly through the next two frames. By the end of third quarter Germany led 46-38, before outscoring Canada 22-7 in the fourth quarter to blow the game open in their favour and improve their record to 3-0.