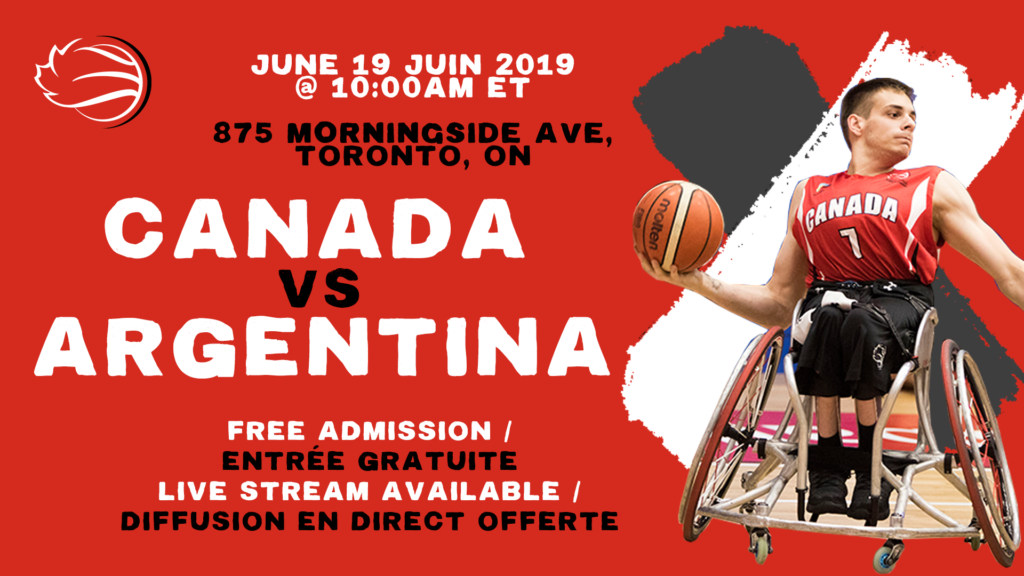 The Canadian men’s national team takes on Argentina in an exhibition match on June 19, 2019. This is a preview for the 2019 Lima Parapan American games, where both teams will face off in the group stage.

This is the first of numerous exhibition matches for Canada in the build-up to Lima.

Argentina is the reigning two-time South American champions, having won their latest in 2018 to qualify for Lima 2019.

“They’re a great team,” team veteran David Eng said. “They got experience. They’ve been playing a while together, they’ve got a couple of players on that squad that played overseas in the Pro League.

“They’re really methodical and patient with the ball,” he added. “They got a good mixture of height and outside shooting.”

Meanwhile, Eng said Canada’s had a summer of “great training” heading into this match.

“I think the load management has been better than year’s past where we’re actually training a little bit smarter and be able to go really intense on intense days and be able to manage our rest as well,” Eng said.

According to him, the training and rest has been more regimented towards each individual player.

Eng is one of the veterans on the team, as a four-time Paralympian (two gold medals and one silver).

“Since 2012, we were a mix of the vets and the young guys and we were lacking experience but I think that the young guys are ready at this point right now to perform at the best of their abilities,” Eng noted. “We’re very confident. It’s probably the most confident in the past few years now.”

The team has also learned from the 2018 World Championships – where Canada finished 12th and “underperformed.”

“At Rio [2016 Paralympics], there were a lot of excuses why we underperformed that weren’t valid and I think at Worlds, there was no excuses,” Eng said. “So the young guys actually understood what it took to get to the next level.”

“And it showed,” Eng added. “in how the athletes are actually training this year…and how certain athletes are doing extra work on their own.

Meanwhile, Argentina finished 7th, their best-ever finish in the competition. They are led by Gustavo Villafane, a 2018 tournament all-star.

“He’s really good,” Eng said of him. “He’s not flashy at all, just really fundamentally sound…he’s one of the players that really doesn’t have an off day. His average day is a really good day and he can just go off at times.”

Eng said he’s also had a chance to talk with Villafane numerous times over the years and calls him a “great guy” as well.

Both sides are looking to qualify for the 2020 Paralympics in Tokyo by finishing in the top 3 in Lima. The Parapan American games run from Aug 23 to Sept. 1.

The Canadian Senior Men’s National Team is hosting Argentina and the Netherlands from June 19-25, 2019 for a series of friendly exhibition games.

The Canada vs Argentina game will start at 10 a.m ET at the Toronto Pan Am Sports Centre (875 Morningside Avenue) in Toronto. Admission is free and everyone is encouraged to come. Fans will also be able to watch all of the action via the CBC Gem app and cbcgem.ca, as well as on WBC’s YouTube channel.