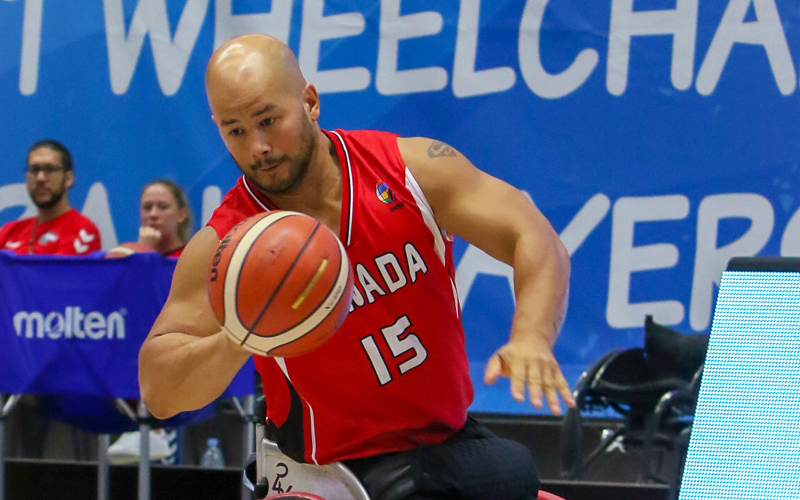 On the men’s side, all eyes were on Canadian star Patrick Anderson (Fergus, Ont.) who was playing in his first World Championship in a dozen years. Number 12 did not miss a beat, drumming up a double-double and scoring a game-high 26 points, 10 rebounds, and seven assists.

“Compared to 2006 it’s just incredible how deep this tournament goes,” remarked Anderson. “It’s good to have a game like this to get an opportunity to feel the referees out a little bit, and get the jitters out of the way for both the young guys and the old guys that haven’t been in it for a little while like me,” he added.

Fielding a relatively young roster, Canada leveraged the occasion to showcase some depth. All 12 Canucks made their way onto the hardwood for at least five minutes of game time. The result – secondary scoring threats accounted for 34 points (nearly half of Canada’s total offense) with Nikola Goncin (Regina, Sask.) and Chad Jassman (Calgary, Alta.) leading the way. Coming off the bench Goncin accumulated the second most points in the game with 15 and added seven rebounds and five assists, while Jassman went a perfect three-for-three from the field to finish with six points.

“I enjoyed the fact that we had the opportunity to give everyone a chance to play. Getting over any fears and understanding what it means to play at this level is important,” said Canadian head coach Matteo Feriani.

Four Canadian rookies made their major international debuts. Vincent Dallaire (Quebec, Que.) made an impact with four points and three rebounds in his 15:55 on the floor, while teammate Colin Higgins (Rothesay, NB), had a standout performance with five points and two rebounds in just 6:12 of court time. Lee Melymick (Toronto, Ont.) also played 6:12 and 18-year-old Garrett Ostepchuk (Regina, Sask.), the youngest player on the team, played 5:44.

“It was definitely a lot more challenging than I expected, but it was a really amazing feeling and I’m just happy to get that first one out of the way,” said Ostepchuk. “I can now move on to the next one and be more prepared for the next game and the rest of the tournament.”

The Canadians made their opponents pay from the free-throw line knocking down 12-for-15 (80%). Anderson and David Eng were both flawless from the charity strip going five-for-five, and four-for-four respectively.

“It’s important to get your confidence up and get into a rhythm right from the start. I think we did that today and the team showed we are gelling and coming together. There was good chemistry out there,” said Eng.

“I love this tournament. It’s a little more fan friendly in a lot of ways than the Paralympics because you can be a little closer to all the family, friends and supporters that are here to support you while the level of basketball is just as good.”

The Canadian Men will play their next game Sunday August 19 at 12 p.m. ET against Germany. 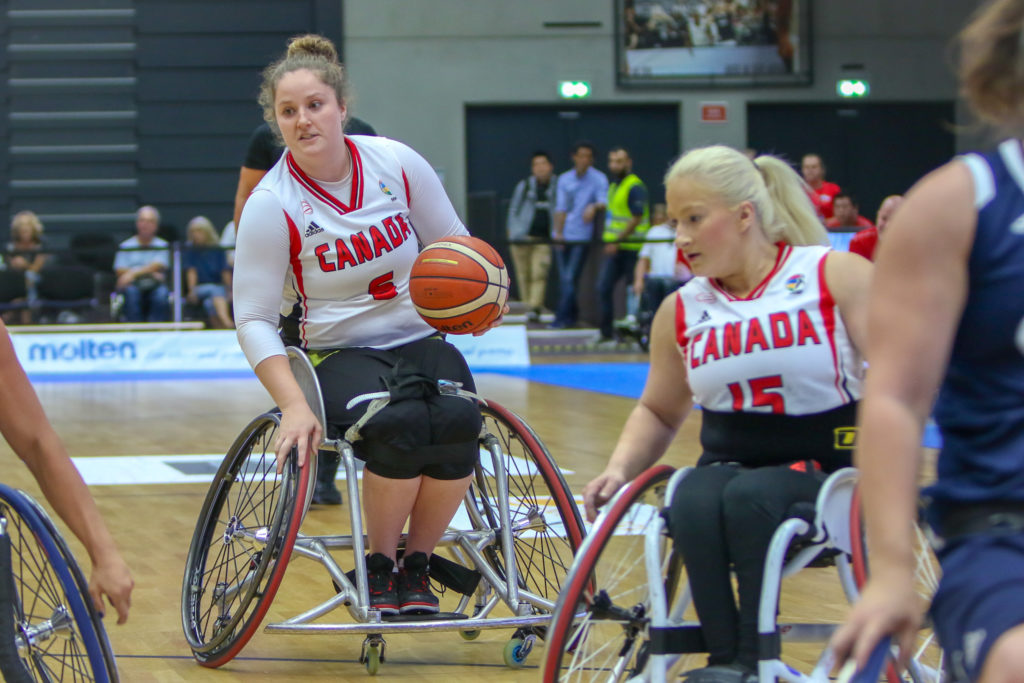 While the Canadian women put up a solid showing in a tightly contested game, Great Britain took the win in the final two minutes of play by denying a comeback after Canada closed the gap to two points in the fourth quarter.

Canadian sharpshooter Arinn Young (Legal, Alta.) put up a game-high 23 points along with 15 rebounds and five assists. She was a major catalyst offensively, earning the double-double (12 points and 10 rebounds on 60 per cent shooting) in the opening half before running into foul trouble in the third quarter.

“I’m glad we got the first one out of the way,” said Young. “Not the result we wanted but we have to look ahead at our next one.”

“Eight points is the difference of a few things we can do better in the game,” said Canadian head coach Marc Antoine Ducharme (Chambly, Que.). “We don’t have big adjustments to make in order to win against that team, so I am pretty happy.

“It’s the first game and we have eight games in this tournament. The top four in each pool go on to the quarter-finals, so it’s not the end, just the beginning. We just have to stay focused for each of our other games and make sure we look forward and don’t look back.”

The first quarter saw Great Britain attacking early, putting on the pressure and moving the ball well in the offensive zone. The British starters shared the offensive load as they attacked Canada from several angles. Canada stayed in the game on a couple of back-door cuts by Tamara Steeves (Mississauga, Ont.), as the first quarter ended 18-15 in favour of Great Britain.

Great Britain stretched the lead to as much as 11 points in the second frame, before Young and Canadian teammate Cindy Ouellet (Quebec, Que.) began to catch fire and helped Canada close the gap. Canada trailed by six points, 37-31 at halftime.

Canada came out firing in the third on the strength of two points from Rosalie Lalonde (Saint-Clet, Que.) and back-to-back buckets by Young, cutting the lead to a single point. With the Canadians gaining momentum, Great Britain put on a full-court press that forced Canada to turn the ball over.

Young would pick up her third and fourth fouls in just over a minute midway through the quarter, forcing coach Ducharme to take her off the floor to avoid her fouling out early in the game. While that put a dent in Canada’s momentum, the Canucks battled to remain within striking distance as the British side took a 49-41 lead into the fourth quarter.

Kady Dandeneau (Pender Island, B.C.) opened the final frame with a clutch three-pointer as part of her seven-point, four-rebound performance in her first major international game for Canada.

“Getting the opportunity to play against some of the best players in the world, as an athlete, that is what you work for,” said Dandeneau. “You want to be here and to play in these games. It was good to get in and contribute a little. It was a tough loss, but I know we can bounce back.”

Élodie Tessier (Saint-Germain-de-Grantham, Que.) and Tara Llanes (North Vancouver, B.C.) also played in their first major contents for Canada. Tessier converted on a single shot for two points in 11:46 of playing time, while Llanes saw 2:49 of court time in her debut.

Young got back into the game with just under six minutes to play in the match and sparked another Canadian offensive push. Young scored three buckets in under three minutes to cut into the lead, then Steeves converted on another back-door play to bring Canada to within just two points of tying the game, as the score sat at 58-56 with 2:43 left to play.

That was as close as the Canadians would get as Great Britain rallied to end the comeback attempt. With Canada forced to foul the British team to stop the clock, Great Britain made no mistake in converting at the free throw line and closed out the game on a six-point run.

Next: The Canadian women are back in action on Saturday at 6:15 a.m. ET against Spain.