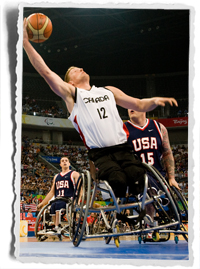 (St. Catharines, ON) Canada’s Sr. Men’s Wheelchair Basketball team is holding their final training camp on Canadian soil prior to the London 2012 Paralympics at Brock University in St. Catharines, Ontario where they will host Team USA in a three-game Pre-Paralympic Test Series July 16, 17, and 18 at 7:30pm EST.

The games will serve as a re-match of the double-overtime thriller in which Canada beat the USA in the semi-final of the 2008 Beijing Paralympics and possible London medal round preview. Canada went on to win silver in Beijing, while the USA dropped to fifth place. The Beijing semi-final is widely regarded as one of the greatest matches in Canadian wheelchair basketball history.

Canada heads to London hungry for its third Paralympic gold and fourth consecutive podium finish in London, following back-to-back gold in 2000 and 2004 and silver in 2008.

Team Canada is bolstered by the return of Patrick Anderson (Fergus, ON), considered the top player in the world, and 11 returning players, 9 of whom have Paralympic experience. Seasoned veterans Dave Durepos(Fredericton, NB), Joey Johnson (Winnipeg, MB) and Richard Peter(Vancouver, BC) will tie a Canadian record by competing in their fifth Paralympic Games in London. It will be the first Paralympic Games for Brandon Wagner (Burlington, ON), Chad Jassman (Calgary, ON) and Tyler Miller (Kitchener, ON).

Team Canada will depart August 14th for a final tune-up tournament in the Netherlands on August 16-19. They will stage in in Sheffield, England August 20-24 before moving into the London Paralympic Village.

Paralympic competition starts for them August 30th against Japan at 1:00pm BST.