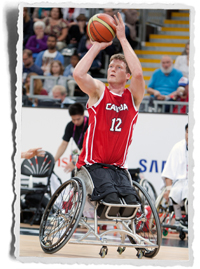 (Ottawa, Ont.) The Senior Men’s National Wheelchair Basketball Team will compete in the Kitakyushu Champions Cup November 15-17, 2013 in Japan. The international tournament features Canada facing off against Australia, Korea, and host Japan in a number of friendly matches that promote barrier-free sport. It will be the team’s first international competition since placing sixth at the Americas Cup in July, and final tournament of 2013.

“This tournament is a tremendous opportunity for us to test ourselves against some of the top teams from a part of the world that we don’t often get to match up against. The timing works out great because our opponents will be peaking in their training cycle as they prepare to compete in the Asia Oceania zone qualification tournament at the end of the month. This helps ensure top level competition for our veteran guys, but also allows us to mix in a few of our up-and-coming stars and ensure they get increased exposure to international competition,” said Wheelchair Basketball Canada High Performance Director Paul Zachau.

“This tournament is a tremendous opportunity for us to test ourselves against some of the top teams from a part of the world that we don’t often get to match up against.”

Canada’s roster in Kitakyushu will include twelve athletes and four staff. Seven of the players were part of the team’s gold medal run at the London 2012 Paralympics, including three-time Paralympic gold medalist Patrick Anderson, who last competed for Canada in 2012. It also includes three youngsters who recently competed at the Men’s U23 World Championship in Turkey where Canada placed sixth, including the tournament’s most valuable player Nik Goncin and all-star Vincent Dallaire.

The twelve men representing Team Canada at the Kitakyushu Cup are (* indicates members of the 2012 Paralympic gold medal team):

The action will commence on November 13 with a number of exhibition games and school visits planned.