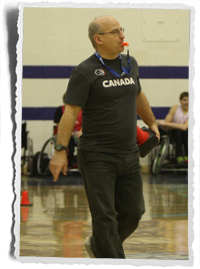 (Toronto, Ont) The Canadian Men’s U23 team, which is centralized at the University of Toronto Scarborough campus making final preparations for the upcoming Men’s U23 World Wheelchair Basketball Championship, is inviting local media to attend an intra-squad game August 9, 2013  from 2-4pm ET where they will showcase the elite skill and athleticism that has pushed Canada into contention for a third gold medal in five competitions.

The intra-squad game is part of Canada’s final training camp prior to the 2013 Men’s U23 World Wheelchair Basketball Championship slated for September 5-15, in Adana, Turkey. Canada won back-to-back gold medals at the tournament in 1997 and 2001.

Junior National Team players Nik Goncin (Regina, Sask.) and Jonathan Vermette (Sherbrooke, Que.) will not be there as they are currently representing the Senior National Team at the 2013 Americas Cup in Botoga, Colombia.

The Canadian Junior Men’s Wheelchair Basketball Team consists of the top male athletes under 23-years-of-age from across the country. They are assembled with the ultimate goal of competing in, and winning the U23 Men’s World Championships, which are held every four years. Canada hosted the inaugural tournament in 1997 and won back-to-back World Championships in 1997 and 2001.