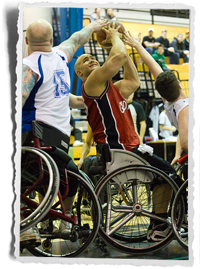 (Montreal, QC) All of the fast-paced, hard-hitting action of the Canadian Wheelchair Basketball League (CWBL) will be on display in Montreal, Quebec when the top men’s and women’s club teams in the country drop in for their respective league championships April 12-14, 2013 and April 26-28, 2013.

The 2013 CWBL Open Championship taking place April 12-14, 2013 at the Centre Pierre Charbonneau, will feature Montreal native and London 2012 Paralympic Gold medallist David Eng, and fellow member of the Laval Gladiateurs, Alex Courcelles, who recently qualified for the 2013 World Junior Championship with Team Canada. Competition begins the morning of Friday April 12, 2013 and wraps up with a medal ceremony following the gold medal game the afternoon of Sunday April 14.

The 2013 CWBL Women’s Championship will take place in conjunction with the Défi Sportif AlterGo 2013 from April 26-28 at the Collège Édouard-Montpetit in Longueuil, Quebec. Elite female athletes such as senior women’s national team member Elaine Allard, of Montreal, Quebec will be in attendance. A medal ceremony will follow the gold medal final Sunday morning. Wheelchair Basketball Canada will also pilot a 3-on-3 women’s event.

The tournaments are co-hosted by Wheelchair Basketball Canada and Parasports Québec.