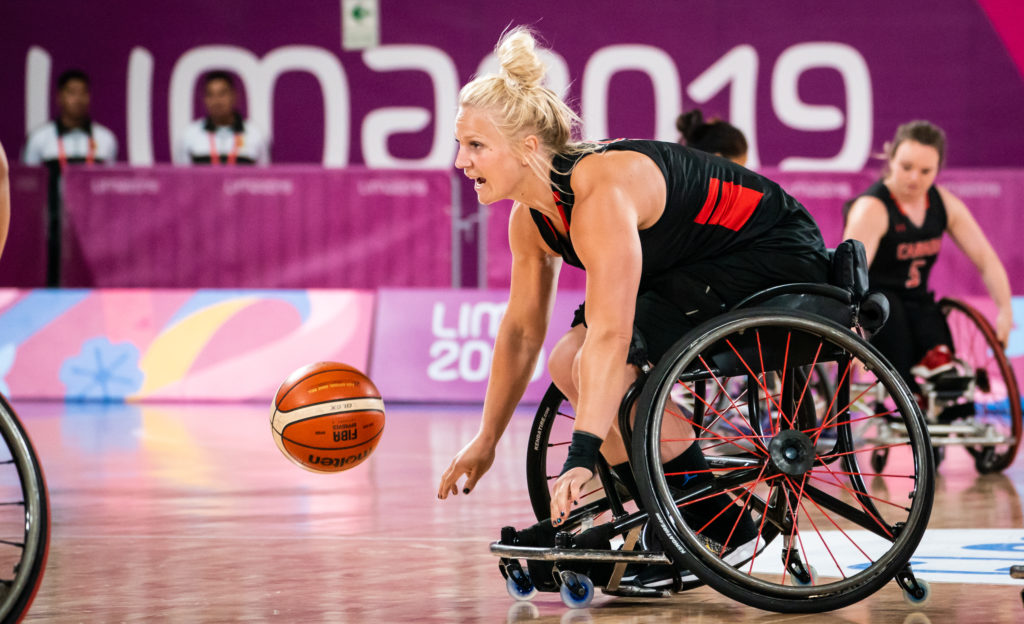 (August 27, 2019 – LIMA, PERU) With a berth into the Tokyo 2020 Paralympics on the line, the Canadian Women’s Wheelchair Basketball Team has advanced to the semifinals of the Lima 2019 Parapan American Games. Canada cruised past Mexico 79-21 to secure top spot in Pool A with a tidy 3-0 record.

Canada is set to face-off against Brazil in a do or die game on Thursday. The USA will take on Argentina in the other semifinals, also on Thursday. The winner of those two games advance to the Lima 2019 gold medal final on Friday and earn the right to compete at next year’s Paralympic Games in Tokyo. Only the top two teams in Lima will qualify for Tokyo 2020 from the Americas zone.

Arinn Young of Legal, Alta. continued her dominant play putting up a game-high 29 points in back-to-back games on the strength of 70% shooting from the field. She added six rebounds and five assists.

“I’m really proud of the team. We are showing our team chemistry in all of these games. You have to give it to the other team for showing a lot of heart and hustle, but we have a job to do here and that’s what we are going to do,” said Young.

The Canadian defence was nearly impeccable in the first quarter. Canada stifled Mexico’s attack and gave up just a single basket through the first ten minutes of play. They quickly established a 19-2 lead going into the second quarter. By halftime the lead swelled to 36-8.

All 12 Canadian got on the board for Canada in the game. Kady Dandeneau, of Pender Island captured a double-double with 13 points and 10 rebounds, while also dishing out eight assists.

Canada shot 64% from the field. Led by Cindy Ouellet of Quebec City, Que. with a game-high 10 assists, they moved the ball around well and accumulated 33 helpers in the win to earn their spot in the semifinals.

“The semifinals is a game just like any other game. If we put too much pressure on our shoulders it will be tough. We practiced all summer, for four months, so we know we are ready. We are pretty strong team and we continue to play as a team and just have fun we will do well,” said Ducharme.
“We know we have to start out really strong in the semifinals and dictate the pace and dictate the whole game. You know it comes down to who wants it more at that point and I think that’s going to be Canada,” said Young.

Canada is looking to extend their medal winning run at the Parapan American Games, having captured two gold medals (1999, 2003) and three silver medals (2007, 2011, 2015) in five appearances. The Parapan Am tournament serves as the direct qualifier for the 2020 Tokyo Paralympic Games. Canada needs to finish in the top two to qualify for next year’s Paralympics.

“We really need to focus on what we can control. We are going to bring our style of play and be really physical and just play through, and hopefully come out on top,” said DuPlessis.