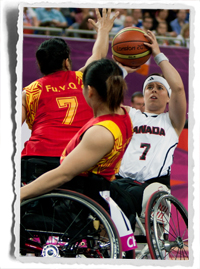 Once again, Janet McLachlan of Vancouver, British Columbia, led the way for Canada, scoring 22 points and adding 17 rebounds – her seventh double-double of the tournament. She led the tournament in scoring, rebounding, and blocked shots with 182 points, 117 rebounds, and 6 blocked shots.

“This team has a great future. We have some great young players and some players who have gained great international experience being here and I think we can continue and improve. The next four years is going to be a great time,” said McLachlan.

“Anytime you have a Games like this and you can get the kind of media attention that you can get, I think it has a wonderful thing for Paralymic sports in general.

“It’s very hard. You definitely need perspective at times like this when you come out here with goals so lofty. We wanted to place higher. But a lot of people would give up all they have to wear the jersey and play for Canada so we are very proud,” said Harnock. 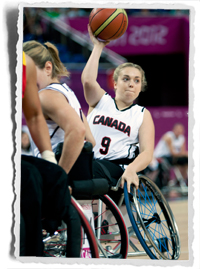 With the score deadlocked at halftime (29-29), China began to pull away in the third quarter, outscoring Canada 18-13 in the frame. Canada managed to bring the game back to level terms late in the fourth quarter, and even took a three-point lead with three minutes remaining, but clutch free throw shooting by the Chinese guaranteed the Asian nation the win, and the 5th place finish.

“We have a relatively young team, five players brand new to the Paralympics and seven who are very young, so we can build on that for the future,” said Team Canada Head Coach Bill Johnson.

Although the women’s tournament is now complete, the men square off against Australia in tomorrow’s Paralympic final, with the gold medal game tipping off at 9:15pm BST.