Canadian Women’s U25 Wheelchair Basketball Team To Stage In Burnaby, B.C., In Preparation For World Championship 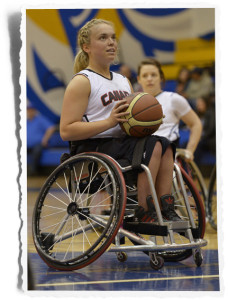 (Ottawa, ONT.) In their final preparations before the 2015 Women’s U25 World Wheelchair Basketball Championship, the members of the Canadian Women’s U25 Wheelchair Basketball Team will be staging at the Fortius Sport & Health Centre in Burnaby, B.C. June 24-28, 2015. Aiming for a podium finish, Team Canada will use its time in Burnaby to fine tune its game before battling Australia, China, Germany, Great Britain and Japan at the world championship from June 30 to July 6 in Beijing, China.

Media are welcome to attend an open practice on Friday June 26, 2015 from 10 a.m. to 12 p.m. PT to capture visuals and interview Team Canada athletes and coaches. Four of the Canadian players will also represent Canada at the upcoming Toronto 2015 Parapan Am Games in August.

TV/Photo Op:
Catch a glimpse of the sheer athleticism, speed, and intensity of the wheelchair basketball players who will star at the 2015 Women’s U25 World Wheelchair Basketball Championship

Who: The following athletes will represent Canada (athletes’ city of residence indicated / athletes that will compete at the Toronto 2015 Parapan Am Games denoted with a *):

What: Staging camp in preparation for the 2015 Women’s U25 World Wheelchair Basketball Championship