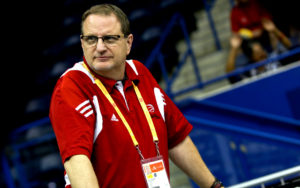 (Toronto, Ont.) Paul Bowes has been part of the Canadian wheelchair basketball community for over two decades, from coaching athletes new to the sport to some of the top high performance athletes in the country. His coaching has brought him around the globe to world championships and Paralympic Games. Over the past year, Bowes has brought his immense coaching experience and passion for the sport to another level as the head coach of the Canadian Invictus Wheelchair Basketball Team that will compete this week at the 2017 Invictus Games on home soil in Toronto, Ont.

The Invictus Games are an international adaptive sports competition for wounded, injured and sick service members and veterans. The Games use the power of sport to inspire recovery, support rehabilitation and generate a wider understanding and respect of all those who serve their country.

It was the philosophy of the Invictus Games that inspired Bowes, a native of London, Ont., to get involved as head coach.

“The reward for me is knowing that many of these athletes are falling in love with sport,” said Bowes. “The philosophy is not about reaching the finish line or the end of the game, it is about making it to the starting line, the first tap ball, and they have made an amazing choice to put themselves out there on a world stage and to be proud to wear the red and white representing their country once again.

“I thought representing Canada at the Paralympic stage would be the highest level of sport I could achieve, but I was wrong; to serve those who have served at the highest level – the Canadian Armed Forces – is an honour which I am still trying to comprehend after working with these athletes for nine months.”

For most of the Canadian team the 2017 Games mark their first foray into wheelchair basketball.

“Most of our team had little if any experience in the game and they have come together as a team in a very short time. We have gone over FUNdamentals to keep them engaged and we have worked on chair skills and ball handling,” explained Bowes.

Upon taking up his head coaching duties, Bowes put the call out to fellow coaches, athletes and volunteers in the Canadian wheelchair basketball community. An amazing response from the community helped get the team ready for the games. Training camps for the Invictus athletes were held across the country. Coaches like Tim Frick, Simon Cass, Katie Miyazki, Marc Antoine Ducharme, Steve Sampson and Joe Higgins, among others, pitched in to help along the way, with athletes dropping in to visit with the team as well, including the likes of Patrick Anderson.

“We come into these games very fresh but extremely focused and motivated to compete. Compete is our word and the scoreboard is only there to keep score, it certainly will not define the effort and passion these athletes have put into this sport, training hard all summer long,” said Bowes of what spectators can expect from the competition.

“To be among the men and women who have served is humbling. Their stories, their families’ stories and their fight for survival, words cannot do it justice. Their commitment to our country is now being shown on the playing field, and they work hard and each and every one of them deserves to be on this team and represent Canada once again.”

Overall this experience has reinforced the positive impact that wheelchair basketball and the power of sport can have for the athletes and for Bowes himself as a coach.

“I have learned that sport is truly a healing experience, and the comradery that is being developed on this team, not only our basketball team, but the Invictus team and the Invictus teams around the world, are benefiting from the power of sport and pushing themselves to their personal bests.

“This has been one of the most incredible experiences of my life and we haven’t even started yet. It will be all of our jobs to keep these athletes involved well after the Games are over. I have had many athletes come up to me who are not on the basketball team but want to try it out after the Games. That is what is exciting for me, that people see our sport as fun and competitive and accepting of everyone. The Invictus spirit is something that is now part of my composition as a coach, and has only motivated me to give back more in the future. What we all get to do and take for granted in this free world is because of them, and for that, I will be forever grateful.”