The second day of the 2017 Men’s U23 World Championship started off with a heated match between Brazil and Italy. The Italian team sought redemption after a loss on their first day of the tournament and secured a convincing 61-35 win against Brazil.

While Brazil found themselves behind early in the first, they fought hard to match the fast Italian pace, and outscored them 12-7 in the second quarter. Italy was determined to stop their opponents from closing the gap and upped the pressure on the Brazilian offense causing them to rush their shots and once again fall behind.

Top scorer for Italy was once again Sabri Bedzeti with 21 points while Francisco Sampaio countered with 16 for Brazil.

The Italian head coach, Marco Bergna, reflected on the win, “Yesterday we played against the home team, it was a very emotional match. We started the game with a little bit of fear. Today, we tried to fix all the mistakes yesterday against Canada. I think we did a great job correcting those mistakes today.”

In the closest game of the tournament so far, Japan took the win 61-59 against Great Britain.

“We have a strong defense and our core value is defense, we didn’t care if we were behind or not, so we focused,” said player of the game Japan’s Takuya Furusawa of their path to victory.

Great Britain had taken an early lead and outscored Japan in the first half but Japan kept a steady pace and was able to catch Great Britain in the second. With 30 seconds on the clock in the fourth and Japan trailing by two, Furusawa sunk three to push them ahead 60-59 and secure the win.

Furusawa led the Japan offense with 23 points and Jack Perry led the charge for Great Britain with 17 points. 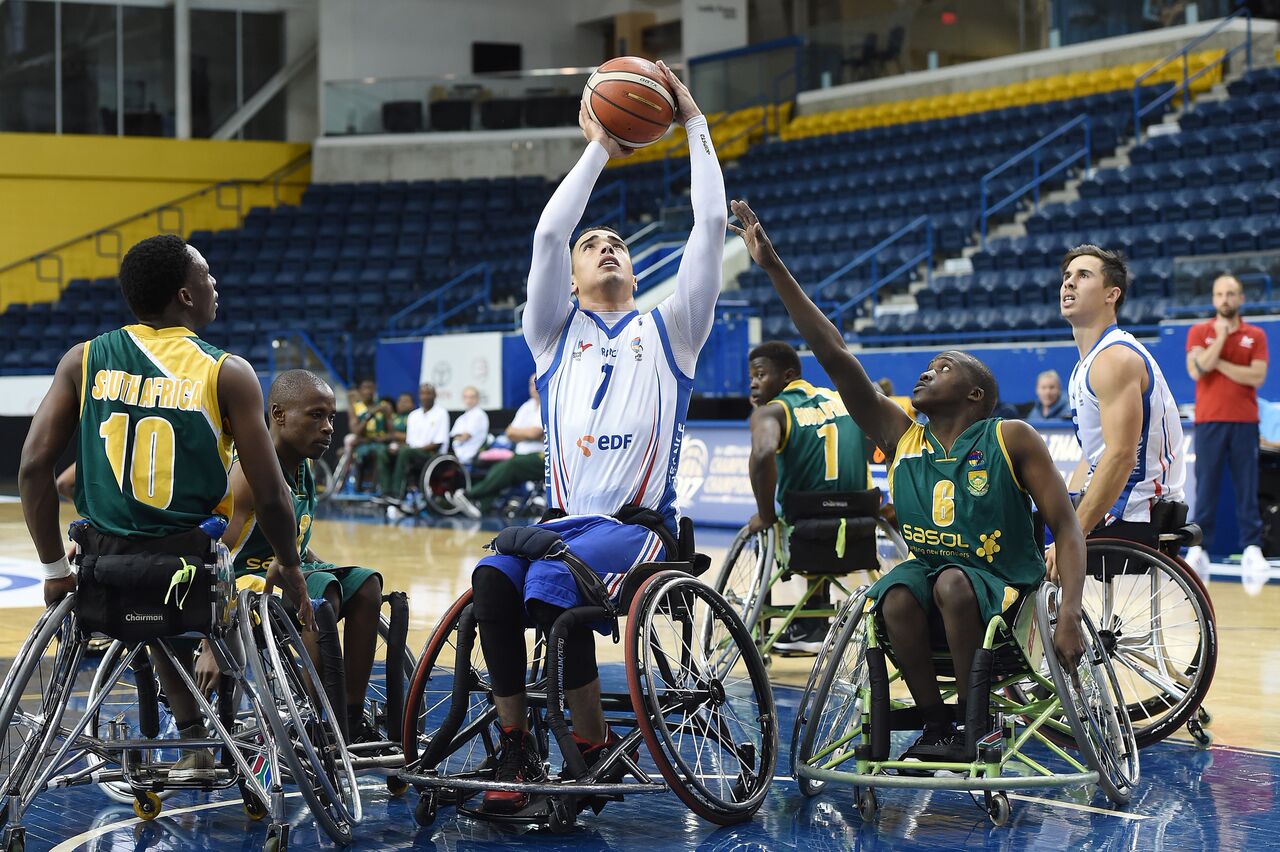 Coming back from their loss against Japan the day before, France found a decisive 87-29 win against South Africa.

France’s strong shooting shone throughout the game, the team ending with a 60% shooting percentage. Sebastian Evanno led the France offense with 16 points and Jim Ayabongo countered with 12 points for South Africa. 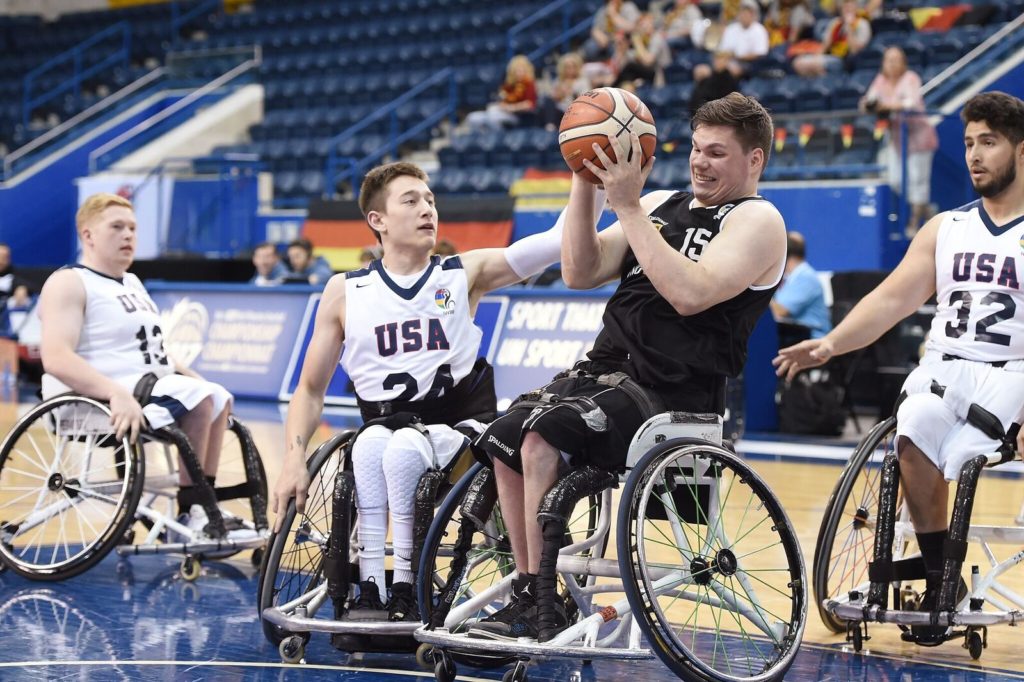 Germany held off the United States 75-51 for its second victory of the tournament. Germany carved out an early lead against the United States, leaving the States to trail by 7 at the end of the first quarter and then 12 by half.

The German team was able to convert on their shots and with a strong defense kept the States from finding opportunities to shoot.

German players Nico Dreimüller and Marvin Malsy led their side with 23 points each, while Dreimüller contributed a double double with 12 assists. Kyle Gribble of Crystal Lake, Illinois responded with 18 points for the United States. 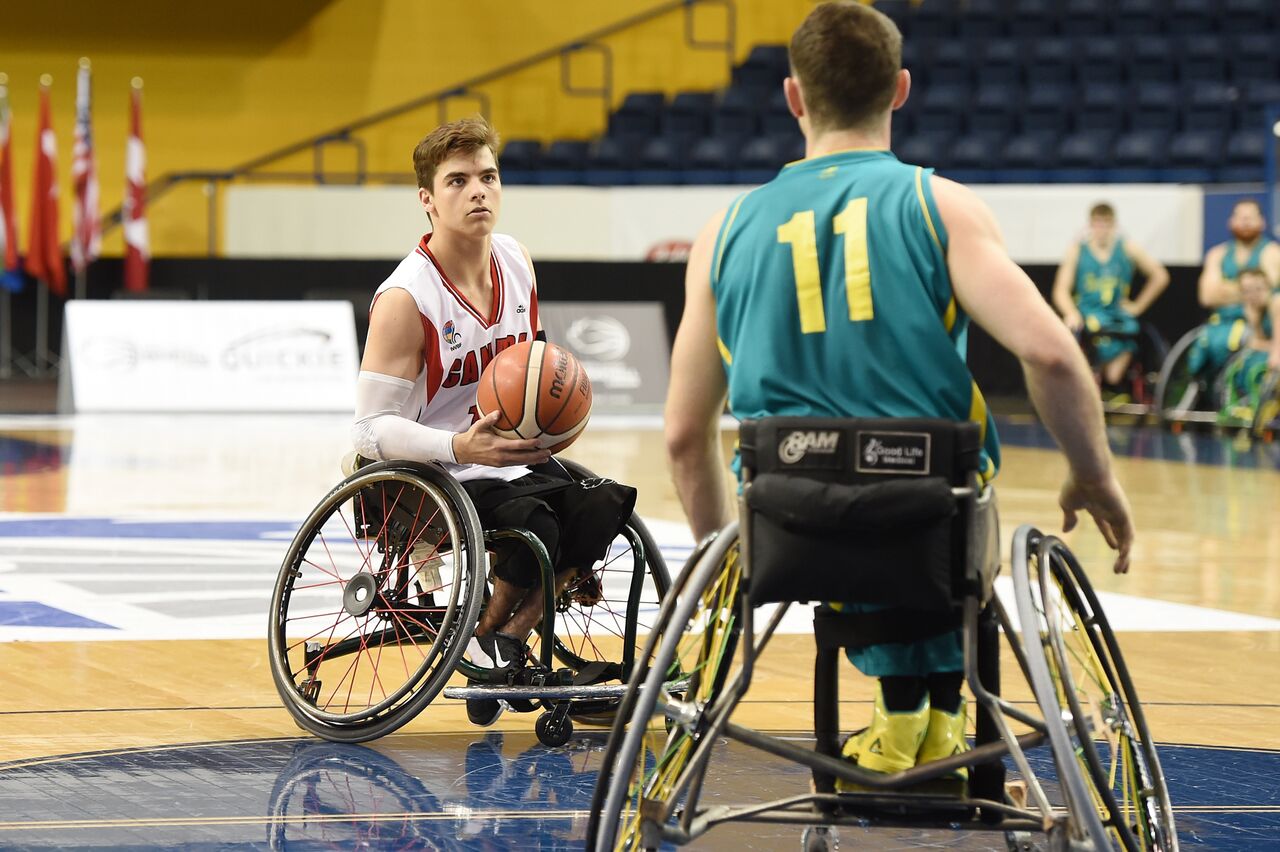 A heated contest between Team Australia and hosts Canada resulted in a 62-58 win for the Aussie team and Canada’s first loss of the tournament.

The game began with the teams exchanging leads before Australia’s Tom O’Neill-Thorne led the Australian team to an 11 point lead in the second quarter. Aggressive defense from Australia kept Canada from finding the space they needed to convert on their shooting opportunities.

It took the hometown team until the third quarter to hit their stride and catch up to Australia. A buzzer beater by Alex Hayward at the end of the third closed the gap for Canada making it 41-41. Hayward opened up the fourth with another two points, giving Canada their first lead since the beginning of the game. The teams exchanged leads but near the end of the game Canada missed some key opportunities that allowed Australia to push ahead and maintain the lead in the final stretch.

Tom O’Neill-Thorne, player of the game, nearly secured himself a triple double, tallying 26 points, 12 assists, and 9 rebounds for Australia. Another strong game for Canada’s Ben Moronchuk saw him claim the game-high 28 points.

“We started out pretty well which was part of our game plan,” said O’Neill-Thorne. “We knew we needed to get up, you know with the home crowd with them being up and about. I thought we played really well in the first half to keep them a bit low, then in the third quarter they kind of took off and their shooters started making the easy shots, and then the hard shots. They’re a great team and one of the favourites for a reason. We came ready to play and executed our game plan for 40 minutes.”

Canada’s head coach, Darrell Nordell is looking forward to the games to come. “It was a very exciting game, that’s why we play basketball every day. We look for the learning opportunities, I think we learned a lot from that. Especially in an end game situation; when we want to foul, who we want to have the ball, how we want to rotate it, we learned a lot from that, it’s just a blip in the road. We get to play again tomorrow.”

Turkey claimed an impressive 71-53 win against Iran in the final matchup of the second day of the 2017 Men’s U23 World Championship.

The teams appeared to be an even match throughout the first half of the game. Turkey claimed a small two point lead by the end of the first quarter and they were able to build momentum to slowly widen the gap.

By the end of the third Turkey had climbed 18 points ahead of Iran due to their offensive prowess and ability to capture rebounds. In the end Iran was unable to match the Turkish point producers. Ahmet Efetürk of Turkey was the first player in the tournament to achieve a triple double with 19 points, 10 assists and 16 rebounds. Iran’s Mohammadhassan Sayari put up team-high 16 points and a game-high 17 rebounds.