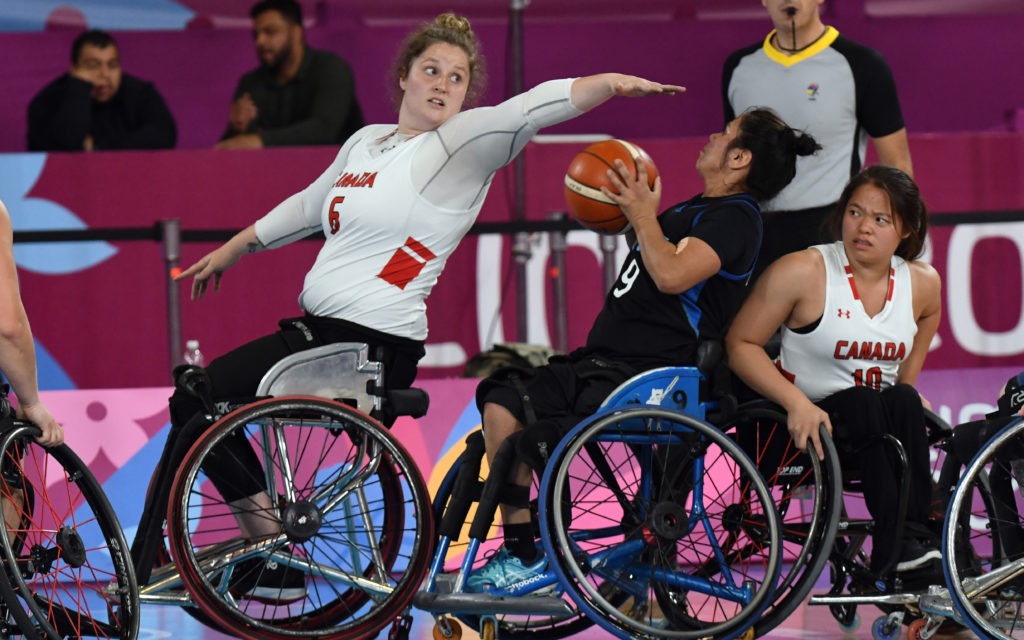 (August 25, 2019 – LIMA, PERU) The Canadian Women’s Wheelchair Basketball Team improved their record to 2-0 at the Lima 2019 Parapan Am Games with a lopsided 82-25 victory over Argentina. Canada’s dynamic offense was fuelled by the deadly precision of Arinn Young, of Legal, Alta. who shot 75% from the field and put up two three pointers in the game. She needed just over 20 minutes on the court to accumulate a game-high 29 points, which is the most scored by a Canadian in a single game at the previous three tournaments (2007, 2011, and 2015).

Young wasted little time making her presence felt by missing just twice from two-point territory on a dozen attempts, while going 3-for-4 from the free throw line. She added a game-high five assists and matched Tara Llanes of North Vancouver with a game-high five rebounds each.

“It’s really important for us to get as many points as possible because points matter not only for this game, but for the whole tournament. As much as we are really taking it to them, it’s a job and we can’t let up. We came out with a lot of fire and ran through our lineups that we needed to run in order to get reps in that will make us successful going forward,” said Young.

Young was one of three Canadians to score in the double-digits. Tamara Steeves of Mississauga was impeccable from the free throw line going a spotless 6-for-6 to finish with 14 points and a game-high four steals. Starter Cindy Ouellet of Quebec City, Que. was used sparingly but efficiently as she contributed 10 points playing just a sliver over 18 minutes of court time.

“It’s really important to stay sharp because we want to get one of those top two spots. So we have to stay focused. I think the whole team is doing a good job to help each other to stay focused, and it’s good that everybody can play now and get good minutes so that we can be ready for those big games,” said Ouellet.

“We know we have to approach every game like just another basketball game. We know there are big games coming, so we have to get ready for those big games, that’s what matters,” said Ouellet.

Canada scored their first basked 28 seconds into the game and never looked back. The held the lead the entire game. Their offense and defense peaked in the the second quarter where they outscored Argentina 27-2 and at one point went on a 36-0 scoring run.

Next up, the Canadian women will play their final match of the preliminary round against Mexico on Tuesday August 27 at 9:00am ET.

“I’m so excited to play Mexico. We haven’t played them since 2015. We have the same goals for the game, to keep pushing and to make sure we are playing Canada basketball. Most importantly we want to keep having fun, but our main goal is to win and that’s what we are thinking about going in,” said Young.

Canada is competing in Group A of the preliminary round alongside Argentina, Colombia and Mexico. The top four finishers in the women’s event will move onto the semifinals.
Canada is looking to extend their medal winning run at the Parapan American Games, having captured two gold medals (1999, 2003) and three silver medals (2007, 2011, 2015) in five appearances. The Parapan Am tournament serves as the direct qualifier for the 2020 Tokyo Paralympic Games. Canada needs to finish in the top two to qualify for next year’s Paralympics.