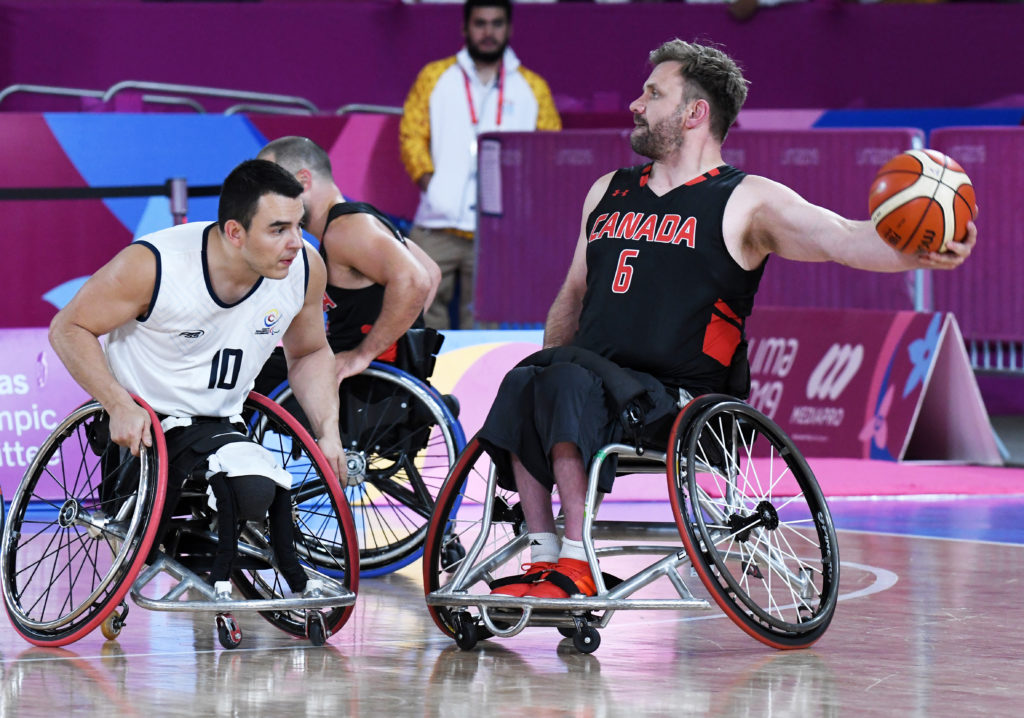 (August 25, 2019 – LIMA, PERU) The Canadian Men’s Wheelchair Basketball Team’s quest to finish in the top three at the 2019 Parapan American Games began with a definitive three-pointer by Nik Goncin of Regina, Sask. that set the tone in the opening minutes of their 64-51 win over Colombia. Powered by a persistent attack and steady defense, Canada continued to find ways to score big buckets at critical junctures throughout the game. As a result, they never relinquished the lead in their first game of the tournament that serves as their one and only qualifier for the Tokyo 2020 Paralympics.

Seconds after Goncin opened the scoring for Canada, Tyler Miller of Kitchener, Ont. hastily dished the ball down low to a wide-open Patrick Anderson of Fergus, Ont. Anderson, who had snuck behind his opponents, took the pass and quickly deposited the first two of his game high 25 points. Playing just under 32 minutes on the night, Anderson was a persistent force that proved overwhelming at times for his opponents. He finished with a team-high 11 rebounds and 9 assists, just one assist shy of a triple-double.

“It’s always great to start the tournament off with a win. Colombia is a good team and one of the teams we knew we needed to beat in order to put ourselves in the position we want to be in, so it’s a great start for us in this tournament,” said co-captain Bo Hedges, of Wonowon, B.C.

Hedges, who finished second in team scoring with 13 points, and also collected seven rebounds, emphasized the importance of the teams focus heading into the game.

“There may have been a little bit of jitters early on, especially for some of the young guys, but I think everybody came out and was ready to go. We have been training hard all summer and everybody was just chomping at the bit to get going,” said Hedges.

One of the young guys making his international multi-sport Games debut, who showed no signs of jitters, was Colin Higgins of Rothesay, N.B. Shortly after coming off the bench Higgins drove hard to the basket and found some room alone under the hoop where he was the benefactor of a long-distance Anderson pass. He proceeded to flash his craftiness by quickly corralling the ball, and while spinning his chair around, he was able to put back the reverse layup and claim his first basket at Parapan American Games in the process. Higgins went on to tally six points and five rebounds.

“The Paralympics are the pinnacle of our sport and we want to get there, punch our ticket, and finish top three. We know what we have to do to get there and this is our first step. We know we have to grind it out for the full game and to showcase that we are the better team over 40 minutes. I think we did that and got off to a nice start,” said Higgins.

Canada lead by as much as 14 points in the game, but Colombia managed to cut the lead to ten with just a few seconds remaining in the third quarter. Once again it was Goncin who delivered another critically timed three-pointer. This time it was a buzzer beater that put the crowd in a frenzy and put Canada up 49-36 heading into the fourth quarter. 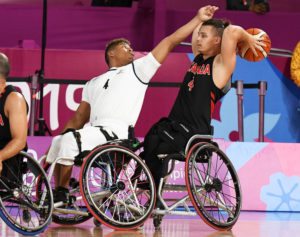 Colombia did everything they could to close the gap down the stretch. That’s when Chad Jassman of Calgary Alta. swooped in to score back-to-back field goals that helped eliminate the mounting momentum from Canada’s opponent.

“I thought the critical stage was when I was watching from the bench and Jazzy hit those two big jumpers from the free-throw line that kept that gap just big enough when it was getting a little bit nervy there. It gave us that breathing room that gave us that confidence back. Those are huge shots, and not ones that we look for him to take all the time. The fact that he is ready to step up and hit those is huge. We will be looking for more of that from him and other guys if we want to make it back into the top echelon of teams,” said Anderson.

It was also in the fourth quarter, when the game was on the line, that Anderson showed more flashes of brilliance. He helped put the game out of reach for Colombia by draining back-to-back field goals that hit nothing but net.

“It’s not like I don’t get nervous anymore. It’s just that I try and remember that I have been really nervous and played really well. So that just gives me a little extra confidence to go and shoot the ball even if I feel myself starting to get a little tight when the game gets tight. So that was sort of a perfect one, it was close enough to maybe start feeling that pressure, but not so close that it got too scary,” said Anderson.

The next battle for Canada comes quickly when they face Mexico at 11:15am ET on August 26.