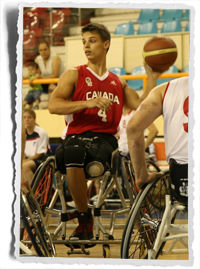 Despite superior shooting in every category the Canucks ultimately fell victim to Great Britain’s defensive zone discipline with free throws proving to be a major difference maker. Canada shot 42.8% (21-for-49) from the field, and while they limited their opponents to shooting just 34.4% (20-for-58), they were awarded an uncharacteristically low number of free throw attempts (going 2-for-4 from the line), compared to the British who cashed in on 14-out-of-29 attempts.

“With eight lead changes in this one, it was anyone’s game to win,” said team Canada head coach Steve Bialowas.

“We put forth a solid effort today an I am proud of our guys even though we came up just shy against a resilient Great Britain team. The guys are getting better every game and our plan is to continue building on this momentum tomorrow against Germany.”

Great Britain scored the first basket of the game before giving way to Canada who went on a 12 point run to start the first quarter and find themselves ahead 12-2. By the end of the first quarter the score was knotted at 14 apiece.

Nik Goncin, of Regina, Sask., scored 15 of his game-high 24 points in first half including a three-pointer sandwiched between a pair of field goals that reestablished Canada’s lead 23-16 at the midway point of the second quarter. Goncin also finished with a game-high 17 rebounds and five assists, good enough to notch his second double-double in as many games, however Canada was unable to put up any more points before halftime. They held a narrow 23-22 lead heading into the break.

Great Britain’s momentum temporarily continued to start the third quarter where they briefly captured the lead before Kevin Wakeling, of Cambridge, Ont., put an end to their 13-point run with a layup for Canada. The Canadian troops followed up with more hot shooting, including baskets from Vincent Dallaire, of Quebec City, Que., Goncin, and Wakeling, who finished the game with 10 points and six assists. By the 6:45 mark of the third quarter Canada had once again established a small buffer with the score 34-28 in their favour, but once Great Britain had a response while Canada’s offense dried up to end the quarter. The teams headed into the fourth quarter deadlocked at 34-34.

The game continued to seesaw back-and-forth in the final frame before Great Britain slowly built a nine-point lead. Canada fought back to narrow the deficit to four points, but with time running out they got into foul trouble and hole proved too large to climb out of.

The World Junior Championship is held every four years and Canada is one of twelve countries competing for the world title in Adana, Turkey, September 7-14, 2013. Canada has the added incentive of potentially becoming the only team in history to win the tournament three times. The inaugural Junior World Championship was held in Toronto in 1997 and Canada went on to win the first two tournaments (1997 and 2001).