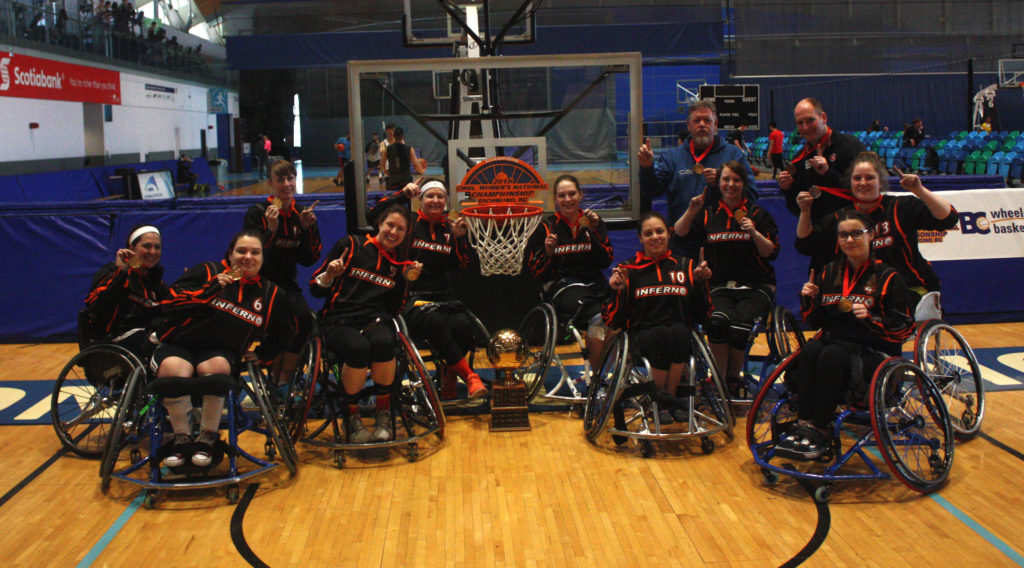 (RICHMOND, B.C.) The Edmonton Inferno wins gold at the 2018 Canadian Wheelchair Basketball League (CWBL) Women’s National Championship at the Richmond Oval in Richmond, B.C Sunday after defeating Team Quebec, 58-55. The Saskatchewan Hot Wheels reached the podium with a win in the bronze medal game over the BC Breakers.

Edmonton captured the momentum early by making a few nice shots, including a deep three from Arinn Young at the buzzer, with a score of 17-13 at the end of the first quarter. The second quarter saw Quebec dictating the tempo with Élodie Tessier getting a few offensive rebounds and Quebec putting up some solid defense. A steal from Cindy Ouellet resulted in Quebec taking their first lead of the game with three minutes left in the second quarter. Quebec led 25-23 at half time. An intense third quarter saw multiple lead changes, but Edmonton just pulled ahead by two points, with a score of 41-39 at the end of the third. In a decisive fourth quarter, it was back and forth until the very last minute. Cindy Ouellet took a three with 11 seconds left to try to tie the game, but just misses. As a result, Edmonton claims the gold, while Quebec settled for silver with a final score of 58-55. Arinn Young remained a powerhouse throughout the entire tournament and it was no different in the final game as she scored a team high of 21 points for Edmonton.

“It was a hard fought game against Quebec who has four Paralympic athletes on their team,” says Karla Tritten of Edmonton Inferno. “It came down to managing emotions, being patient, and trusting your teammates.”

It was bittersweet for Tritten as this was her last game after a 30 year career. She retires with a gold medal around her neck.

In the bronze medal game, both the Saskatchewan Hot Wheels and the BC Breakers came out strong. It was a seesaw battle between the two clubs in the first two quarters, but Saskatchewan soared ahead in the third, leading by 24 points at the end of the quarter. BC battled to erase the deficit in the fourth quarter but Saskatchewan came out on top and secured the win with a final score of 70-48. Erica Gavel dropped a team high of 29 points for Saskatchewan, while Amanda Yan put up 14 points for BC.