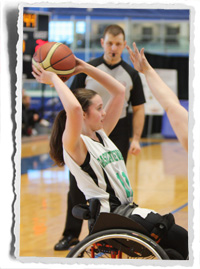 “BC Wheelchair Basketball is excited to host the 2018 Women’s National Championship,” says Sian Blythe, Executive Director of BCWBS. “Part of the legacy of us hosting events like this is the exposure and inspiration the next generation of players get from being exposed to this top level of competition.”

In an intense first game, Edmonton Inferno defeated Quebec 67-62. Edmonton took an early lead in the first quarter but after a few fast breaks from Quebec, they closed the gap to two points by half time. It was evenly matched in the second half, but in a decisive fourth quarter, Edmonton ultimately took the win. Arinn Young (Edmonton) and Cindy Ouellet (Quebec) both led their teams with 32 points apiece.

In the second game of the day, the Saskatchewan Hot Wheels took on host BC Breakers. Saskatchewan dominated with a 20-6 lead after the first quarter and were able to maintain a solid lead throughout the game, winning with a final score of 64-41. Shelby Harrower (Saskatchewan) put up an impressive 22 points.

With one win apiece, Edmonton and Saskatchewan battled each other next to claim the top spot of the day. After a 10 point deficit in the first quarter, Edmonton made a come back and took the win over Saskatchewan with a final score of 70-67. Erica Gavel (Saskatchewan) and Arinn Young (Edmonton) were the top point producers with 30 points each.

Quebec claimed their first win of the tournament, outpacing BC 70-33 in the final game of the day. Cindy Ouellet was once again the offensive catalyst for Quebec with 16 points, while Amanda Yan responded with 12 points for BC.