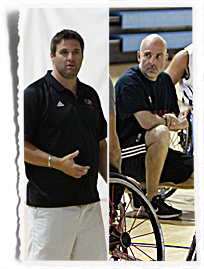 “We are happy to have Matteo and Marc Antoine on board through to the world championships in 2018,” said Wheelchair Basketball Canada High Performance Director Jeff Dunbrack. “Both coaches have come in and had immediate success with our Canadian teams and have fit in seamlessly with the players and support staff within the National Team program. We are confident they will continue to lead Team Canada toward positive international results as we take on the world in 2018.”

A native of Chambly, Que., Ducharme led the Senior Women’s National Team to a gold medal and undefeated 5-0 record at the Americas Cup. Meanwhile, Feriani, a native of Padua, Italy, coached the Senior Men’s National Team to a silver medal and a 6-1 record in Cali. Team Canada players Patrick Anderson (Fergus, Ont.) and Cindy Ouellet (Quebec, Que.) were both named tournament MVPs at the Americas Cup by the IWBF.

The 2018 IWBF World Championships will take place August 16-26, 2018 in Hamburg, Germany and feature 16 men’s teams and 12 women’s teams each vying for the title of world champions.

The Senior Men’s National Team is one of the most highly respected wheelchair basketball programs in the world. Team Canada reached the podium at four consecutive Paralympic Games from 2000-2012, winning gold medals in 2000, 2004 and 2012, and a silver medal in 2008. The team has also medalled at six of the past eight world championships.

The Senior Women’s National Team is amongst the most successful and dominant teams in Canadian amateur sport history. The team captured three consecutive Paralympic gold medals in 1992, 1996, and 2000, and bronze in 2004. They have also reached the podium at seven consecutive world championships, a run that includes five gold medals.