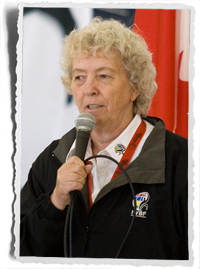 (Winnipeg, Man.) Maureen Orchard, president of the International Wheelchair Basketball Federation, was honoured with a YMCA – YWCA Women of Distinction Award at a gala event in Winnipeg on Wednesday.

A leader and an innovator, Orchard has revolutionized the way the sport of wheelchair basketball is played today. As a lifelong volunteer, she has played a vital role in the development of the sport at every level within Canada.

She continues to foster growth of the sport worldwide in her current role with the IWBF, particularly for junior athletes and women.

The Women of Distinction Awards were created by the Winnipeg YWCA in 1977 to honour the contributions and achievements of women.