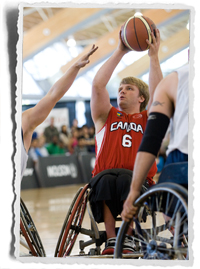 (Ottawa, Ont.) The Senior Men’s National Wheelchair Basketball Team will put their reputation on the line when they compete at the 2013 Americas Cup in Botoga, Colombia August 4-11. It will be the team’s first major international tournament since capturing gold at the London 2012 Paralympic Games.

The Americas Cup serves as the qualification tournament for the 2014 Men’s World Wheelchair Basketball Championship. The top four teams in the Americas Zone (North and South America) earn a berth to the world championship, which is set for the summer of 2014. Canada will compete against eight other teams, including Argentina, Brazil, Colombia, Mexico, Nicaragua, Puerto Rico, the United States, and Venezuela.

“This tournament is a great opportunity for our athletes and coaches to build on our recent accomplishments. A top-four finish will allow us to continue working towards the top of the podium at the 2014 World Championship and Rio 2016. We have a good combination of veterans and young players which makes for a dynamic and energized group keen on building on Canada’s success,” said Jerry Tonello, Team Canada men’s head coach.

Eleven players will represent Team Canada, seven of which are returning players from the 2012 Paralympic gold medal winning men’s team.

The 11 men representing Team Canada at the 2013 Americas Cup are: (athletes’ city of residence indicated / returning players from the 2012 team denoted with a *):

The players will stage in Botoga July 29 before competition starts on August 4.