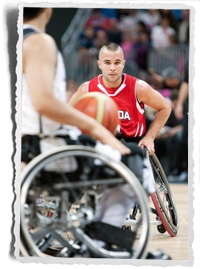 The Wheelchair Basketball Canada National Academy plays host to Japan this week for a training camp and series of exhibition games at the Toronto Pan Am Sports Centre in Scarborough, Ont.

The friendly games will take place from January 26-29, 2016 at TPASC and are open to the general public.

The Canadian men fell 54-52 to Japan in a tight match to open the exhibition series on Tuesday evening.

“It was a very exciting and competitive first game,” said Team Canada head coach Steve Bialowas. “The teams match up well. It will come down to who makes the least amount of mistakes. We look forward to our next three games against Japan.”

The Academy women captured a 63-56 win over the Red Aces in their first game. Meanwhile, the Academy men lost a 77-47 decision in their opening contest against Japan.

On the second day of the exhibition series the Canadian men came back to defeat Japan with a 69-47 victory.

After an additional five minutes of overtime the Academy women captured a 74-64 win against the Red Aces.

“The difference maker in the last five minutes in overtime was the increase in energy we brought to the floor. This allowed us to claw our way back,” said Academy women’s player Jamey Jewells. “I look forward to the challenge of the remaining two games.”

Finally, the Academy men failed to find the same success, admitting a 51-45 defeat to Japan.

After admitting defeat to the Canadian men on the second day, Japan was able to clinch a win after another tight match, overcoming Canada 54-50.

Japan also claimed a victory against the Academy men, defeating them 59-51, to bring their record to 5-1 at the end of the third day of exhibition games.

The Red Aces kept the Academy women from securing a third win in the series by taking the game 63-59.

Three days of exhibition games culminated in an unbelievably tight set of matches between all four teams. Japan closed the final day of the exhibition series with a third win against the Canadian men, narrowly defeating them 55-53.

The Academy men found their stride during the fourth match against Japan, earning their single victory of the series with a close 54-53 win.

The Red Aces tied the series against the Academy women, winning the last game 67-63 to leave both women’s teams with a 2-2 record.

About the National Academy