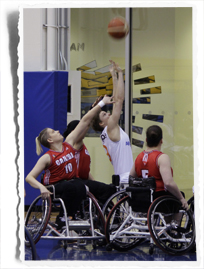 (Toronto, Ont.) Team Netherlands and Team USA opened the Toronto Challenge on a winning note in women’s wheelchair basketball action on Wednesday night with decisions over Canada and Great Britain at the Mattamy Athletic Centre.

The Netherlands emerged victorious 66-60 in a back-and-forth match against Team Canada. The teams battled in a tight first half with Canada’s Cindy Ouellet hitting a long buzzer beater to tie the game at 29-29 heading into the third quarter. The second half proved to be equally intense, with the Netherlands pulling away down the stretch. Mariska Beijer tallied a team best 24 points for the Dutch, while Ouellet led Team Canada with 22 points.

Team USA opened the friendly tournament with a 55-46 win over Great Britain. The match was an even contest throughout, with the USA leading 28-22 at halftime before securing the victory. Desiree Miller led all American players with 17 points. Helen Freeman countered with 11 points for the British side.

Canada will face rival Team USA in its next game at 6:15 p.m. ET on Thursday, while Great Britain and the Netherlands will square off at 8:30 p.m. ET. Action continues through to Sunday at the Mattamy Athletic Centre. All games are open to the public.