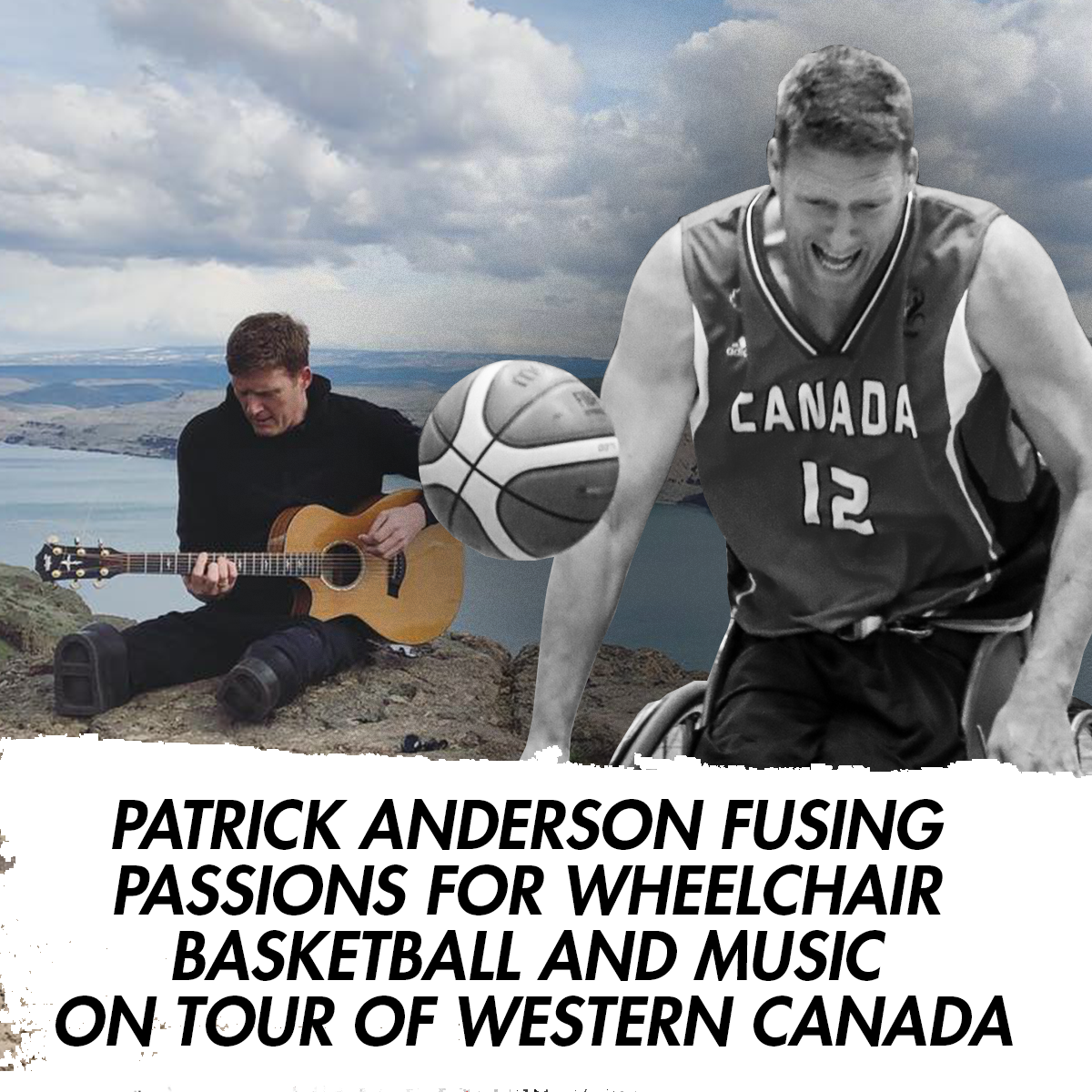 Three-time Paralympic gold medallist and Canadian wheelchair basketball star Patrick Anderson is no stranger to performing on the big stage. Only now he often displays his musical talents over his silky shooting ability and trades in his sleek basketball chair for a guitar alongside the piano and vocals of wife Anna Paddock as part of the singer-songwriter duo The Lay Awakes.

The band with prairie roots is on a tour through western Canada for the month of April, young family in tow, in promotion of their second album Home Away From Home with gigs in British Columbia, Alberta, Saskatchewan and Manitoba. Widely recognized as the greatest wheelchair basketball player of all time, Anderson is fusing his passions for music and basketball along the way.

While on tour with The Lay Awakes, he is making a point to drop in on old basketball teammates, offer some words of wisdom to the next generation of athletes, and visit schools to promote the sport. He revels in the opportunity to share his love of the game. 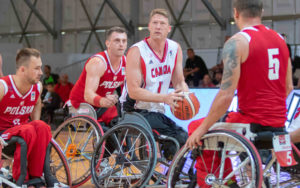 “Being in the gym with somebody, you can’t take that for granted,” said Anderson. “I don’t know how many more years I’m going to be able to play and play at a high level. It’s just having connections with people face-to-face on the same court, whether they’re peers or younger players, I just value each and every one of those moments.

“I’m inspired by being on the court with all different wheelchair basketball players, whether it’s Canada Games athletes or regional athletes, able-bodied or disabled or whatever, just to make some kind of connection and be inspired by their joy for the game. As I get older, newer players who are full of enthusiasm for the game definitely puts some extra wind in my sails and if I can inspire some kids along the way with a few words or a few skills or drills for them then I think that’s worth doing too.” 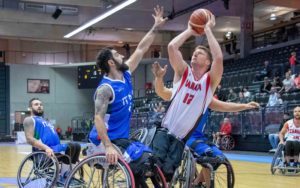 While on tour Anderson is dropping in at a clinic for developing athletes in Edmonton, as well as visiting high schools in Edmonton and Humboldt, Sask.

He is cognisant of the role he can play in growing the greater Paralympic movement and puts himself out there more at this stage of his career to try and inspire interest and passion for wheelchair basketball and the Paralympic Games to potential players, coaches and sponsors.

“I just try to put my game on display and my joy and love for the game and for the community out there a little bit more and hope that that inspires a multiplying effect for the good of the game and the movement.”

All the while he continues to put in the rigorous training hours as he prepares to compete for Canada at the Lima 2019 Parapan American Games in August, which serves as the team’s direct and only qualifier for the 2020 Paralympic Games in Tokyo.

While his devotion to basketball is evident and fans can’t wait to see what is in store leading into Tokyo in 2020, his love for music has also been a fixture since an early age.

Born in Edmonton and raised in Fergus, Ont., Anderson grew up playing hockey and singing songs while playing the piano. When he was nine years old, he was struck by a car and ended up losing both legs below the knees. That didn’t change his desire to pursue his passions.

“Before my accident I loved sports and music, and after my accident I loved sports and music but sort of had to change a little bit how I approached it, especially with sports,” said Anderson. “We know how that turned out, but with music over the years it sort of took a back seat to wheelchair basketball but was always my other love, and I gravitated towards the guitar.” 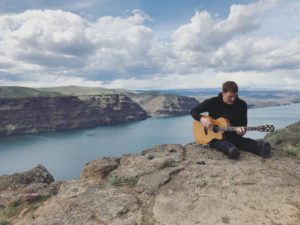 Anderson picked up the guitar in high school and started performing and playing songs here and there. He started writing his own material in college but he didn’t really pursue it further at the time as basketball remained front and centre in his life.

He of course went on to an illustrious career on the international scene with countless outstanding performances and MVP honours on the strength of his dynamic speed, tireless work ethic, unparalleled skill and imaginative basketball IQ. (Look no further than his Instagram account for a sampling of his awe-inspiring on-court abilities).

That mix, added to a deeply talented ensemble cast for Canada, was a formula for three gold medals and one silver medal in four Paralympic Games appearances from 2000-2012, and three podium finishes at the world championships from 1998-2006, including a world title.

With nothing left to prove on the basketball court, Anderson slowly started to shift focus to music after meeting Paddock, a classically trained pianist, in 2009. The pair met at the wedding of a mutual friend who had asked them both to perform at the ceremony.

The two aspiring musicians bonded over their shared love of music, with Anderson ultimately making the move to Brooklyn, N.Y. to study music at Hunter College while Paddock completed her studies in composition at New York University. They got married in 2011, with Paddock releasing a solo album two years later. At this point, Anderson had taken a hiatus from basketball with the Canadian national team and was focused on playing a supporting role by performing as a bass player with Paddock on stage.

“When Anna was out performing by herself I was struck by her boldness and vulnerability to put herself out there on stage with her own original music and I was inspired by that,” said Anderson.

He jokes that he slowly started moving his way forward from the back of the stage to the front before the duo really joined forces. They started writing songs together and that kindled something that prompted the pair to pursue music together. The Lay Awakes were born, with Paddock inspiring the band name choice. 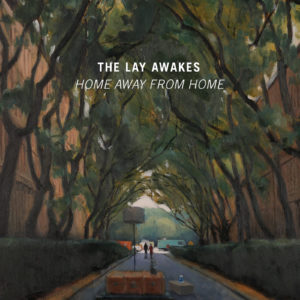 “I’m a very good sleeper so it has more to do with (Anna) and the introspection that comes with sleepless nights and having stuff on your mind and songs that come out of that,” said Anderson.

They released their self-titled debut EP in 2015, right around the same time they welcomed their first child, Stanley. They now have a second album under their belts, which was released in 2018 after the birth of baby number two, daughter Rooney.

“I don’t know why we always do it in pairs but that’s what we did,” joked Anderson, who enjoys sharing both music and basketball with his kids.

“It’s more just a joy to see how much joy they get out of mimicking what we do and I’m just excited to see where that leads. I don’t think we’re intent on making them into this type of athlete or musician, but we certainly want to share these things with them and encourage them to pursue them to some degree with dedication.”

It’s a bit of a juggling act for Anderson when it comes to family, music and basketball, but he and Paddock are approaching the music piece with a long-term lens. With the realization that the same approach wasn’t viable for basketball, Anderson returned to the Canadian national team in 2017 with an eye towards Tokyo 2020.

“We want to play the long game (with music),” said Anderson. “It’s something that we want to do and it’s going to be a slow build over many years and that’s part of the reason I came back to basketball. On the one hand I was realizing that doing music is something that we love to do but we’re too old to be pop stars and there’s going to be no overnight success, so we had time and time to build slowly and we plan to continue with it.

“But with basketball, the window is closing. I’m getting to that age where I realize that I can’t play forever. This was sort of my last chance to play at a high level and that was a really special opportunity and one last opportunity to do that with Anna’s blessing and support, even with the music and the kids. I’m trying to pour myself back into basketball as much as I can.”

This latest tour with The Lay Awakes – for more info on the band and the current tour check out thelayawakes.com – comes during a brief window of downtime from the basketball court.

Anderson just wrapped up his club season in March by winning back-to-back national championship titles with the New York Rollin’ Knicks of the National Wheelchair Basketball Association (NWBA). In true Patrick Anderson style, he picked up the most valuable player award after a 46-point performance in the championship final.

Next month Anderson will centralize with the Canadian men’s national team program at the Wheelchair Basketball Canada National Training Centre in Toronto. That kicks off a four-month block of training and travel for competitions as Canada prepares for the Parapan Am Games in Lima, Peru.

“I think we’re in a much stronger place already since last summer,” said Anderson on the team’s outlook for Lima. Canada can secure a berth to Tokyo 2020 with a top-three finish in Peru.

“I see our older guys, like me, Bo, Deng, Tyler and Jazzi still playing at a high level and a lot of the young guys have a window and opportunity in Peru to really establish themselves. We’re in a position where our veterans are looking good and our young guys have improved in the last year so everybody is trending in the right direction.”

Be sure to follow Canada’s journey towards Lima on our social media channels and at wheelchairbasketball.ca.