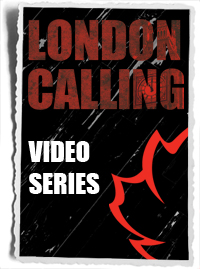 (Ottawa, ON) Canadian wheelchair basketball is renowned for its tenacity. Canada is a world-leading nation. A perennial contender fuelled by an unparalleled legacy. In 2012, elite talent compliments distinguished wisdom in pursuit of the podium. United by an unmistakable desire, Team Canada’s vision for the London Paralympic Games is uncompromising.

Discover the Canadian Men’s and Women’s Wheelchair Basketball teams, learn about their distinctive passion, and find out why their trade is counted amongst the most recognizable and highly contested competitions in the world. Join Team Canada on the last leg of a journey four years in the making. Golden glory summons all nations and come time Canada intends to once again answer the call.

“London Calling” is an eight-part video series that takes an in-depth look at Team Canada, re-visits the winning history of Canadian wheelchair basketball at the Paralympic Games, profiles the evolution of the sport, and previews the highly-anticipated, hard-hitting competition set to unfold in London this summer.

“The London Paralympic Summer Games is the pinnacle of our quadrennial and encompasses what every high performance athlete strives for. This video series is designed to generate some excitement and showcase our athletes and coaches in a way that hasn’t been done before. We feel the teams deserve a lot of credit for their tireless efforts and dedication and we are privileged to share their stories to a wide audience,” said Wheelchair Basketball Canada Executive Director Wendy Gittens.

The two-part series debut looks at the cast of elite athletes that will compete for the Canadian Men’s and Women’s National Teams in 2012:

Wheelchair Basketball Canada will unveil the remaining videos in the series over the coming months as the countdown continues toward the Paralympic Games, which take place August 29th to September 9th, 2012.