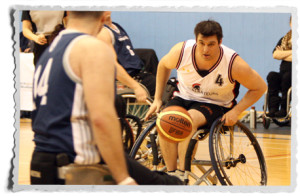 (Montreal, QC) Familiar foes in the Gladiateurs de Laval and the Bulldogs de Quebec will battle for the national title in a clash of undefeated teams at the 2013 Canadian Wheelchair Basketball League (CWBL) Open Championship at the Centre Pierre Charbonneau in Montreal, Que.

The Nova Scotia Flying Wheels and Montreal’s Tornades de CIVA will meet in the bronze medal game at 10 a.m. on Sunday, with the gold medal match set for noon.

The Gladiateurs de Laval were victorious 76-41 against the Nova Scotia Flying Wheels in the other do-or-die match-up on semi-final Saturday.

The Bulldogs de Quebec earned the berth to the gold medal game with a decisive 75-44 victory over the Tornades de CIVA.

Reigning tournament MVP Maxime Poulin was an offensive force once again for the Bulldogs with a game-high 33 points. Benjamin Palmer led CIVA with 14 points.

Preliminary round play wrapped up earlier in the day.

The Bulldogs de Quebec finished in top spot in Pool A with a 65-48 win over Saskatchewan’s Club ’99.

Poulin tallied a game-high 27 points for the Bulldogs while Blaine Hancock scored 10 points for Club ’99.

Game 9 – Nova Scotia vs. BC Royals

The Nova Scotia Flying Wheels punched their ticket to the semi-finals with a thrilling 77-74 overtime victory versus the BC Royals.

Lancia was a game-changer, posting a whopping 50 points for Nova Scotia. Loren Pearson led the charge for the Royals with 20 points.

The BC Royals rebounded from the overtime loss to seize fifth place at the tournament by defeating the Alberta Northern Lights 80-49.

Club ‘99 concluded the tournament with a 68-51 win against Alberta. The teams placed sixth and seventh, respectively.

Jared Sajtos was the offensive catalyst for Club ’99 with a team-best 30 points. Tara Feser was the top point producer for the Northern Lights with 15 points.