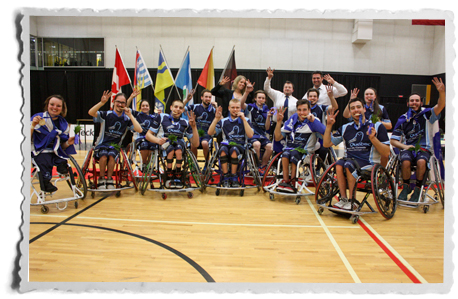 (Prince George, B.C.)
Quebec solidified its place as a sport dynasty by seizing a fourth consecutive gold medal in wheelchair basketball on Friday with a 69-57 win over Saskatchewan at the 2015 Canada Winter Games in Prince George, B.C.

Quebec compiled an undefeated 5-0 record en route to the milestone victory in the championship game.

“The game was awesome. Our starting five players are very good and we’re a well rounded team. It made the difference,” said Team Quebec’s Philippe Vermette, of Sherbrooke, Que. “We pressed Saskatchewan pretty well and our big guys hit their shots. It was the perfect game for us.”

“The game was awesome. Our starting five players are very good and we’re a well rounded team. It made the difference.”

The championship game was a physical, heated affair as the top two ranked teams in Canada faced off. The experienced Quebec side poured the pressure on early. The Quebec defense forced Saskatchewan to turn over the ball and converted on the takeaways, resulting in a 32-24 Quebec lead at halftime. Despite the deficit, Saskatchewan refused to go quietly while Quebec played with ice in its veins, smothering any attempts at a comeback with some precision shooting. Benjamin Palmer was the top scorer for Quebec with 39 points, while Nik Goncin led the offensive charge for Saskatchewan with 23 points.

Quebec averaged the most points per game (72.6) while allowing the fewest points against (40.6) Benjamin Palmer, of Laval, Que., was the tournament’s top scorer with an average of 25.2 points per game.

Team Alberta took home the bronze medal with a 69-54 win over Prince Edward Island. The win marked Team Alberta’s first return to the podium since it captured gold in wheelchair basketball at the 1995 Canada Games, while P.E.I. recorded its best finish at the Canada Games with fourth place.

The opening quarter saw both teams exchange chances with Alberta ultimately emerging with the narrow 16-14 edge. Team Alberta turned up the heat in the second frame, outscoring Team P.E.I. 27-8 to widen the gap. The deficit proved to be too much to overcome for P.E.I. Camrose native Bradon Doll was the top point producer for Team Alberta with 22 points. Jeremy Watts, of Charlottetown, P.E.I., scored a team-high 24 points for Prince Edward Island.

“We came into the game with positivity and the whole team knew that we had to win this game as one,” said Team Alberta player Arinn Young, of Legal, Alta. “We went into it with confidence and we went out there and we really proved ourselves. I’m really happy for our team because last Canada Games we came in sixth place and now we’re bronze medallists. It’s a big jump and it’s been a great experience to be here.”

Alberta will be the hometown team when Red Deer plays host to the next Canada Winter Games in 2019.

Team Ontario placed fifth with a 70-38 win over Team Nova Scotia, improving its record to 4-2 on the tournament. Team New Brunswick placed sixth overall with a 3-3 record following a thrilling 66-65 victory against host Team B.C. British Columbia (2-4) settled for seventh place. Nova Scotia (1-5) picked up its first win of the tournament in its finale, a 52-44 defeat over winless Team Manitoba (0-6). Nova Scotia placed eighth while Manitoba finished in ninth place.

The tournament featured the next generation of rising stars, with and without disabilities, showcasing why wheelchair basketball is amongst the most popular and inclusive sports featured at the Canada Games, which act as a gateway for future Olympic and Paralympic champions.

All of the games were webcast live through the official Canada Games web portal at www.canadagamestv.ca. Join the conversation on social media with the hashtag #CGwheelchairbball.

The 2015 Canada Winter Games is the largest multi-sport and cultural event to ever be held in Prince George and northern British Columbia. The Games will feature 2,400 up-and-coming athletes from across Canada as they compete in 19 different sports, including wheelchair basketball, with the dream of becoming Canada’s next champions. For more information, visit www.canadagames2015.ca.