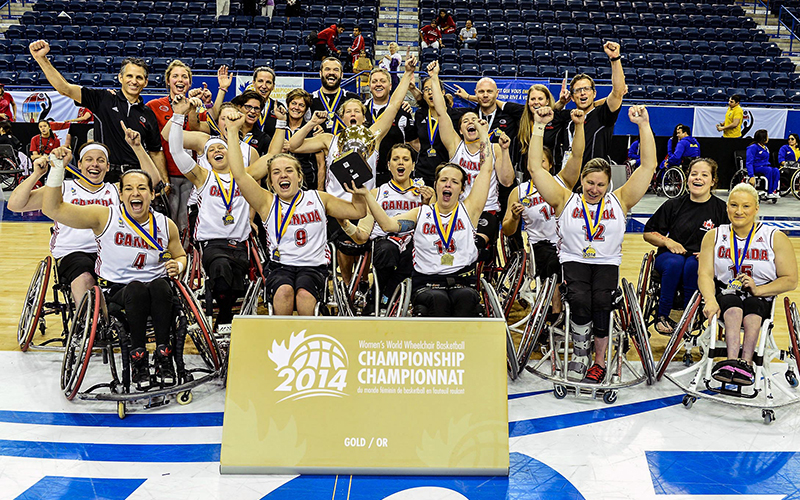 (Ottawa, Ont.) Missing sports? Us too. Join us as we relive all of the excitement of Canada’s magical playoff run to the gold medal on home soil at the 2014 IWBF Women’s World Championship in Toronto. Along the way, we’ll check in with the athletes and alumni who lived it.

Starting this Thursday, April 23, Wheelchair Basketball Canada (WBC) will replay each of Canada’s games in the playoff round en route to the world championship crown on its Facebook and YouTube channels, with the championship game also available on CBC Sports’ digital platforms.

The retro series includes the quarter-final match against Australia, the thrilling semifinal tilt against the powerhouse Netherlands – a game which became an instant classic – and, of course, the nail-biting gold medal showdown against top-ranked Germany.

On April 29, Canada’s gold medal victory over Germany will also be featured on CBC Sports’ REWIND WEDNESDAY, a new weekly digital series bringing back big moments for Canadian Olympic and Paralympic athletes, available through cbcsports.ca and the CBC Sports app for iOS and Android devices. Leading up to the game, fans are encouraged to check out CBC Sports on Instagram at 9:30 a.m. ET for a special Instagram Live where host Andi Petrillo will be joined by Wheelchair Basketball Canada’s team captain, Cindy Ouellet.

Follow Wheelchair Basketball Canada on social media for live updates and more, and join Team Canada on their journey towards Tokyo 2020: