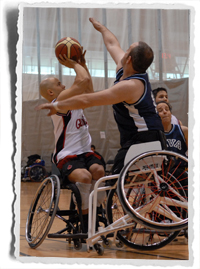 (Ottawa, Ont.) Wheelchair Basketball Canada is pleased to announce that all of the fast-paced, hard-hitting action of the Canadian Wheelchair Basketball League (CWBL) will arrive in Martensville, Sask. from May 4-6, 2018 when the top club teams in the country compete at the 2018 CWBL National Championship.

The best-on-best domestic tournament will be hosted by the Saskatchewan Wheelchair Sports Association (SWSA) at the state-of-the-art Martensville Athletic Pavillion, located just north of Saskatoon.

“We are very excited to be able to host an event outside of a major centre in Saskatchewan,” said SWSA Executive Director Andrea Muir. “This will be the first national event held at the Martensville Athletic Pavilion and we are proud that it is the CWBL National Championship.”

“We look forward to seeing the best players in Canada compete for the club championship as this premier national event returns to Saskatchewan for the first time since 2008,” said Wheelchair Basketball Canada Executive Director Wendy Gittens. “We are thrilled to work with the dedicated team at the SWSA and know that they will put on an outstanding event backed by the strong local wheelchair basketball community in Saskatchewan.”

This tournament is the ultimate showcase of the inclusive nature of wheelchair basketball as the top male and female players from across Canada, both with and without disabilities, put their skill and athleticism on display as they compete with their club teams for the title of national champion.

The festivities will also include the Wheelchair Basketball Canada Annual Awards and Hall of Fame ceremony.