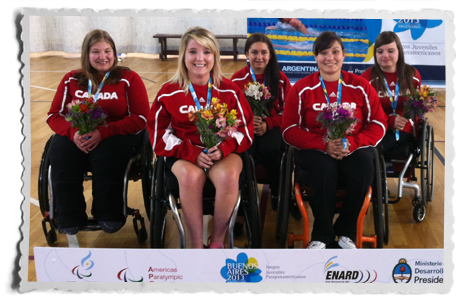 “Competing at this event was a great opportunity for our U21 women and we have learned a lot about the 3 on 3 game at the international level,” said Team Canada Head Coach Michael Broughton. “As a program, this tournament highlighted both our strengths and some areas in need of improvement as we look towards the next Women’s U25 World Championship in 2015.”

“As a program, this tournament highlighted both our strengths and some areas in need of improvement as we look towards the next Women’s U25 World Championship in 2015.”

“We really appreciate the opportunity and support that the Canadian Paralympic Committee and Wheelchair Basketball Canada have given us to compete in Buenos Aries and we look forward to competing at the next Youth Parapan Am Games in Sao Paulo, Brazil in 2017.”

Canada competed against host Argentina and the United States in the tournament, finishing with a 3-3 record.

Helaina Cyr and Stephanie Park each brought a veteran presence to the Canadian side, having represented Team Canada at the inaugural Women’s U25 World Championship on home soil in 2011. Mackenzie Doll, Rosalie Lalonde and Élodie Tessier all competed in their first international games for Canada in Buenos Aires.

About the Youth Parapan American Games

The Youth Parapan American Games are a regional event for 14-21 year-old athletes with disabilities from the Americas continent. Since 2005, these Games have been held every four years and have provided young athletes with a disability in the Americas a platform to show their talent and embrace themselves with the Paralympic values.