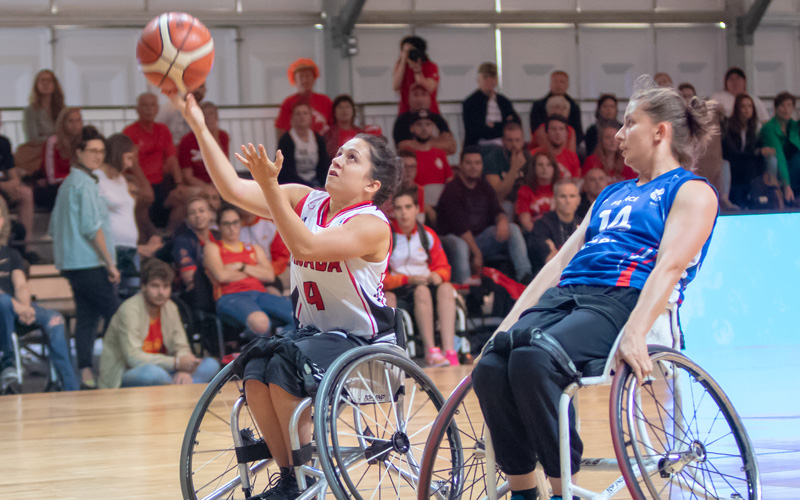 (Hamburg, Germany) The Canadian Women’s Wheelchair Basketball Team will face rival the United States for fifth place at the 2018 World Championships in Hamburg after cruising past France 77-38 in the consolation playoffs on Friday. The battle for fifth place gets underway at 6:15 a.m. ET on Saturday.

The Canadian men also return to action on Saturday to face Italy for 11th place at 3:30 a.m. ET.

The Canadian women rebounded from a disappointing loss in the quarter-finals with a dominant performance against the French. Canada was relentless on the attack both inside and outside of the key, doubling up France on the scoreboard 42-21 at the half. Canada shut down France with a complete team game, as all 12 Canadians were involved in the win.

“We had a really hard loss the other day and a lot of the girls have been dwelling on it, so this was a really good way to show the world Canada can fight through adversity and come out with some wins. Now we can put our focus on coming out top five in the world,” said Arinn Young (Legal, Alta.).

Young put up a game-high 26 points on blistering hot 78 per cent shooting, including going nine-for-11 from two-point range and two-for-three from beyond the three-point line. Cindy Ouellet (Quebec, Que.) and Kady Dandeneau (Pender Island, B.C.) each added 10 points.

Coming off a strong performance in the quarter-finals, head coach Marc Antoine Ducharme started Dandeneau, who made a big impact early on by scoring in the paint and setting up teammates well throughout the quarter. She finished the quarter with six points, three rebounds, and five assists. Ouellet also helped the Canadian squad in the offensive half, tallying eight points on four-for-six shooting to give Canada a 20-11 lead at the end of the quarter.

In the second, Young came off the bench to explode for 14 of Canada’s 22 second-quarter points on six-for-eight shooting. Canada doubled France’s score after the second, up 42-21.

Canada continued to push offensively after the half, led by five straight points by Maude Jacques (Lac Beauport, Que.) to start the third. But Canada really sealed the deal in the final frame as Young went off for 12 straight points in five minutes on five-for-six shooting from the field.

While the team contributed well as a whole offensively, the Canadian defence completely dominated, forcing multiple turnovers especially at the end of the shot clock. Canada scored 22 points off French turnovers.