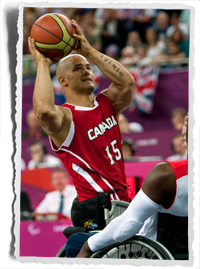 (Ottawa, Ont.) Paralympic gold medallists David Eng and Tyler Miller, both of the Canadian men’s wheelchair basketball team, are receiving some recognition in the form of nominations for a pair of sport awards.

Eng, of Montreal, Que., is a finalist for the Team Sport Athlete Award (International Level) at the 40th Sports Quebec Gala. As a member of Team Canada, Eng captured his second Paralympic gold medal at the London 2012 Paralympic Games as Canada went undefeated at the tournament last September.

The other nominees are soccer athletes Patrice Bernier, a player with the Montreal Impact, and Olympic bronze medallist Rhian Wilkinson, of the Canadian women’s soccer team.

The award will be presented at the Sports Quebec Gala on April 30, 2013 in Montreal. 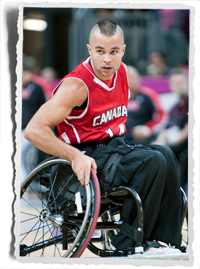 Miller, a native of Kitchener, Ont., has been shortlisted for the 2012 Civitan Sports Award – the top annual sports award in the region of Waterloo. Miller was also a member of the Canadian team that captured gold at London 2012 and he delivered a breakout performance in his first Paralympic Games.