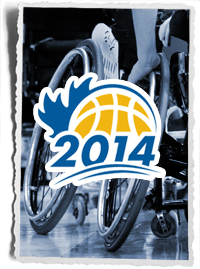 “With the completion of the final qualification tournament in Bangkok last week, we are pleased to announce the 12 teams that will compete in Toronto in June 2014,” said IWBF President Maureen Orchard. “I extend my congratulations to all of the qualifying teams and the IWBF zones for their help in making this possible. I was present at the three qualification tournaments and based on what I saw, I am looking forward to some very intense competition at the world championship.”

Due to the growth and prosperity of wheelchair basketball worldwide, the women’s tournament will be held separately from the men’s competition for the first time since 1994.

“We are proud to welcome the top female wheelchair basketball players in the world to Toronto,” said Tournament Director Wendy Gittens. “Momentum has been building toward this world-class event for quite some time and we look forward to the display of elite skill and athleticism that is sure to follow opening tip off in June.”

The 2014WWWBC is a milestone event that celebrates the ongoing growth of women’s sport, inclusivity and accessibility. By building on the legacy of hosting the inaugural Women’s U25 World Championship in 2011, and working toward the success of the Toronto 2015 Parapan American Games (TO2015), the organizing committee will forge a legacy for female wheelchair basketball athletes in Canada and around the world.
A formal draw will take place at a later date to determine the competition groups for the tournament. The competition schedule will be announced shortly thereafter.

Over 400 athletes, coaches, officials, delegates, and volunteers will attend the 2014WWWBC that features 12 participating countries. Canadians can catch a sneak peek at the top 12 female wheelchair basketball players in Canada, including emerging local talent and highly decorated stars, preparing to compete in one of the most fiercely competitive and exciting spectator sports to be played at the Toronto 2015 Parapan American Games and Rio 2016 Paralympic Games.

The 2014WWWBC organizing committee is also partnering with Toronto 2015 Parapan American Games to ensure the success of both events.

The 2014WWWBC will generate over $4 million in economic activity in Ontario.