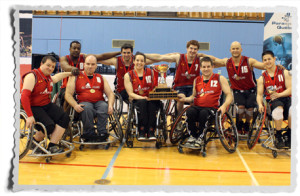 (Montreal, QC) The Gladiateurs de Laval battled their way to gold at the 2013 Canadian Wheelchair Basketball League (CWBL) Open Championship in Montreal, Quebec on Sunday. They overpowered their provincial rival the Bulldogs de Quebec 72-52 in the gold medal game to claim the third national championship title in team history. They last won the tournament in 1999.

David Eng (Montreal, Que.), a member of the Canadian Men’s National Team and London 2012 gold medalist, was dominant scoring 23 points, 11 rebounds, and 10 assists for the triple-triple.

“None of us were on the team that won in 1999, and we have been very close a lot of times, so for the new generation of players to be able to win it here today in front of family and friends is incredible,” said Eng.

Carl Pelletier (Vaudreuil-Dorion, Que.) and Marc-Antoine Ducharme (Chambly, Que.) added 23 points and 17 points for Laval, while Maxime Poulin (Quebec, Que.) countered for the Bulldogs with a game-high 28 points and 13 rebounds.

The medal games concluded three days of intense wheelchair basketball competition in which the top seven club teams in the country showcased their speed, skill and athleticism.

Poulin was named the tournament’s Most Valuable Player, while Ben Marston (Tantallon, N.S.) of the Nova Scotia Flying Wheels, Evan Fenrich (Regina, S.K.) of Saskatchewan Club ‘99, Ross MacDonald (Burnaby, B.C.) of the BC Royals, along with Lancia and Eng were named to the tournament all-star team.