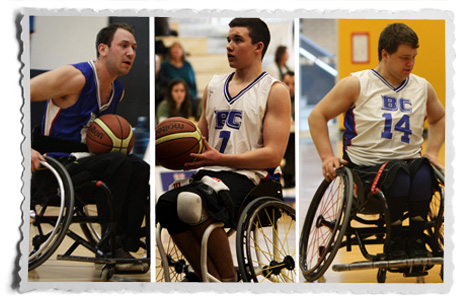 Two former BTG participants were recently named to the U23 Men’s Wheelchair Basketball National team competing in the World Championship in Adana, Turkey Sept. 5-15 and one was named as an alternate to the team.

Originally from Whitehorse, Aidan Love acquired a spinal cord injury during a skiing accident in 2012 and discovered wheelchair basketball through the Bridging the Gap program as an in-patient at G.F. Strong Rehabilitation Centre. After moving to Victoria to attend the University of Victoria, he began training with the local team and quickly attracted the attention of provincial and national team coaches. Despite playing for less than a year, Aidan was just named to the U23 Men’s Wheelchair Basketball National Team.

At only 14 years old, Jack Kosterman is now the youngest member of the U23 Men’s Wheelchair Basketball National Team. After developing Legg-Perthes disease, which causes joint damage, Kosterman got involved in wheelchair basketball through a Have a Go Day. Now, this sharp-shooter is one of Team Canada’s fastest-rising stars.

Former elite mountain biker Justin Johnson acquired a spinal cord injury in 2011 and was introduced to wheelchair basketball as an in-patient at G.F. Strong. His natural athleticism has allowed him to experience success in a short amount of time. He is an alternate to the U23 Men’s Wheelchair basketball National Team.

About Bridging the Gap

Bridging the Gap is a national program aimed at helping individuals with a disability reintegrate into the community and regain their motivation, inspiration, independence and confidence through physical activity.

The primary goal of Bridging the Gap is to eliminate the gap between the introduction of sport and recreation in the rehabilitation setting and continued involvement in physical activity.