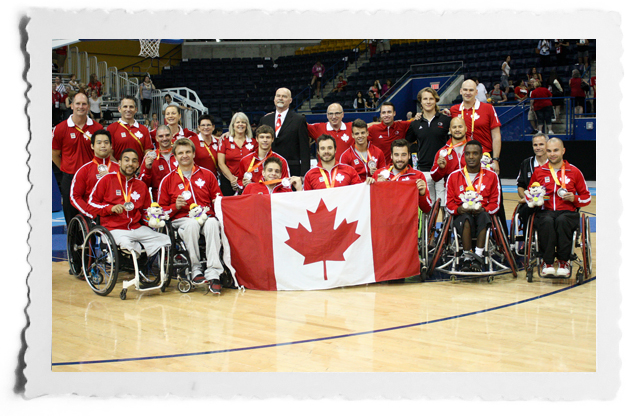 (TORONTO, ONT.) The Canadian Parapan Am Men’s Wheelchair Basketball Team take home silver from the Toronto 2015 Parapan American Games and qualify for Rio 2016 in the process. Canada concluded the tournament with five wins and one loss after the USA defeated them in the final 62-39.

The USA sprung out to an early lead and never looked back thanks in part to some sharp shooting by their veterans. After two quarters Canada trailed 40-16 and had difficultly finding their rhythm. At that point the USA was shooting 58% from the field compared to Canada’s 30%.

David Eng, of Montreal, Que. led the Canucks offence early on scoring 10-of-his-12 points in the first three quarters. Late in the game it was Nik Goncin, of Regina, Sask., that took over scoring all but four of his game high 17 points and 11 rebounds including three consecutive three-pointers late in the game.

“I’m really proud of my teammates to be able to fight that hard and never give up even though we were down by a lot. The crowd was amazing. Even though we were down, their energy showed that Canada was behind us and it just made us not give up and keep wanting to go more. I just can’t thank the fans enough,” said Eng.

Congrats to team USA. Thanks we learned a lot today. We will meet again in RIO.

Bo Hedges, of Wonowon, B.C., led Canada with three assists in the game and 25 overall through six games. He finished fifth in the tournament in that category.

“We knew it’s going to be a tough game. They scored so many times, but our main goal was to qualify to Rio which we accomplished,” said Abdi Dini, of Scarborough, Ont.

“We have a really young team. Lots of our guys have never been in a gold medal game. I think it’s really a good experience for them and my whole team since we’re a young team. It’s really great for them to get that experience and to lose a gold medal, it’s going to give them energy to dig within themselves to get that extra motivation and get to that extra level to get ready for next year,” said Eng.

The gold medal game was seen live on CBC TV across the country.

Although we wanted gold, silver isn’t all that bad. A big thank you goes out to everyone that supported me and the team. #OneTeam #OneGoal