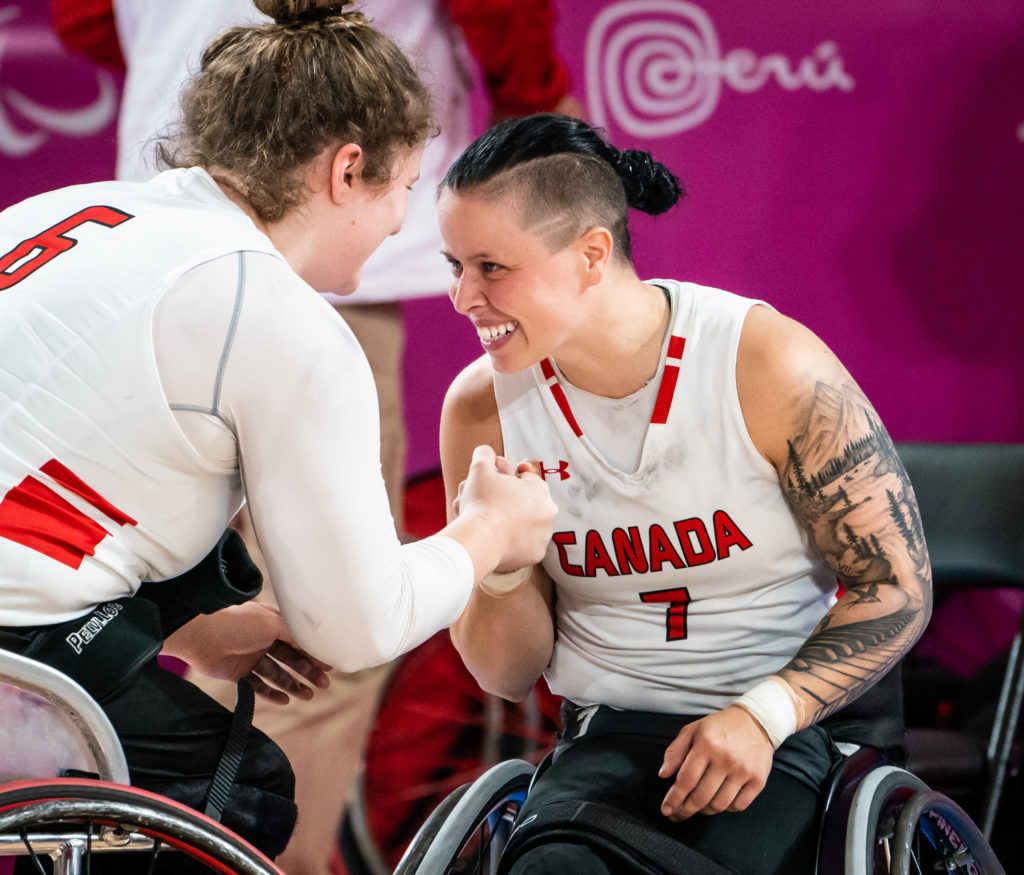 (August 29, 2019 – LIMA, PERU) The Canadian Women’s Wheelchair Basketball Team is heading to the Tokyo 2020 Paralympic Games after a clutch 61-40 semi-final win against Brazil at the Lima 2019 Parapan American Games. Canada and the United States, the tournaments two undefeated teams, will faceoff for the gold medal Friday August 30 at 7:45pm ET. It will be Canada’s sixth consecutive finals appearance at the tournament having won gold in 1999 and 2003, and silver in 2007, 2011, and 2015.

“There are so many emotions right now. I’m just thankful we pulled through. That was a really great team win. We just kept working minute by minute and it paid off. We are going to Tokyo,” said co-captain Arinn Young, of Legal, Alta.

“We have been training for a few years for this tournament to qualify for Tokyo. This summer in particular we trained hard for four months leading into this. So we are super proud right now that we qualified for our country,” said co-captain Cindy Ouellet, of Quebec, Que. 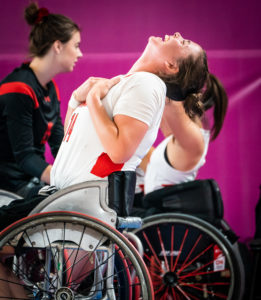 The Lima 2019 championship game will be a rematch of the Toronto 2015 finals in which Canada was edged by the USA 80-72. Five Canadians (Ouellet, Erica Gavel of Prince Albert, Sask., Maude Jacques of Lac-Beauport, Que., Rosalie Lalonde of Saint-Clet, Que., and Young) played in the final four years ago.

“I think Canada is all about redeeming ourselves right now. We had a rough go a little bit for the last couple of years and I think the world needs to see what Canada can do in that gold medal game. We are going to get the job done,” said Young.

The Parapan Am tournament serves as the direct qualifier for wheelchair basketball to the 2020 Tokyo Paralympic Games. Both Canada and the USA have qualified for next year’s Paralympic on the women’s side regardless of the outcome of the Lima 2019 final.

Meanwhile, the Canadian Men’s Wheelchair Basketball Team can also secure their berth to Tokyo by winning their semifinal match tomorrow morning against Colombia at 11:30am ET.

Fans in Canada can tune in to watch the livestream of both games via the Canadian Paralympic Committee Facebook page, CBC Gem streaming service, cbcsports.ca, the CBC Sports app for iOS and Android devices, as well as the Radio-Canada Sports app and radio-canada.ca/sports.

Both Canada and Brazil struggled mightily to put the ball in the net in the first half of their game. Canada shot just 28%, and Brazil 30%, from the field through the first two quarters. The teams combined for just 14 points between them in the second quarter and Canada hung onto a slight 23-18 lead going into the crucial third quarter.

“It was a little bit stressful at first, but we knew what we had to do to win. We stuck to the game plan and then at halftime we took a breath, regrouped, and came out strong in the third quarter,” said Ouellet.

Forty-eight seconds into third quarter the flood gates opened up for Canada. Young posted up and hit nothing but net as Canada finally began to find their rhythm on offence. Moments later they forced back-to-back turnovers and fuelled their growing momentum.

At the seven minute mark of the third quarter Ouellet made a critical steal and made a quick transition outlet pass to a wide-open Lalonde as part of an 11-0 Canadian run that put them up 40-22.

On the strength of remarkable 68% shooting in the third quarter, Canada extended their lead to 20 points. The score was 46-26 in favour of the Canucks heading into the fourth and final frame.

Young finished with a game-high 24 points, and going into the final leads the tournament in scoring with 25.5 points per game. She also had 11 rebounds to earn her second double-double of the tournament.

Canada, who allowed the fewest points against in the preliminary round of play (52), continued to rely on their strong defence. Brazil’s Vileide Almeida who was averaging 15.3 point per game heading into the match was limited to a team-high 11 points.

The Lima 2019 final will be the sixth consecutive time Canada and the USA have faced off for gold in women’s wheelchair basketball at the Parapan American Games. The USA has emerged victorious three times (2007, 2011, and 2015, and Canada twice (1999, and 2003).