With only 14 weeks to go until the 2014 Women’s World Wheelchair Basketball Championship in Toronto, we’re highlighting 14 moments in Canadian women’s wheelchair basketball history that paved the way for what will be the largest women’s world championship ever. We will highlight one moment each Friday from March 14, 2014 until the start of the tournament on June 20, 2014.’ 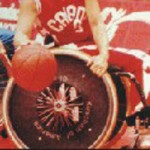 “The addition of the Canadian Women’s Wheelchair Basketball Team to the 1972 Paralympic Games in Heidelberg, Germany was a significant moment in the history of sport in this country. While the Canadian women finished in fifth place, their legacy is that of a team that set the bar high for hundreds of female athletes with a disability that have since followed. Those early pioneers began forging the path to success that twenty years later the Canadian Women’s Wheelchair Basketball Team navigated en route to three consecutive Paralympic gold medals between 1992 and 2000, and which continues to help illuminate the way for all female athletes in Canada who dream of one day representing their country at the highest level.” 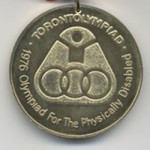 August 3-11, 1976: Team Canada competes in the Paralympics on home soil for the first time in Etobicoke, Ontario, Canada branded as the Torontolympiad – 1976 Olympiad for the Physically Disabled).

“Nearly 40 years ago, Toronto played a significant role in changing how the world viewed disability and sport when it hosted the fifth Paralympic Games. Tens of thousands of Canadians cheered on more than 1,650 athletes from approximately 40 countries who competed in 13 sports including wheelchair basketball. The Torontolympiad was a watershed moment for the city of Toronto, the Province of Ontario, Canada and athletes with a disability worldwide because it shepherded the expansion of eligible Paralympic athletes from strictly wheelchair users to include amputees for the first time. Thanks to hundreds of hours of daily television coverage, awareness about the Paralympic Movement was able to reach new audiences. Canadian athletes, and in particular Canadian wheelchair basketball athletes, have excelled in parasport ever since. As a result competition around the globe rapidly gets better every year and athletes continue to benefit from increased opportunity.” 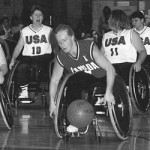 “As the bronze medal game was winding down and we were destined to win, our only thoughts were in the moment. We’d had a peak performance and a positive experience. And now we had a clear picture of what would be needed to win gold. It may have been naive of us to even dream of the gold medal, let alone 3 consecutive Paralympic gold medals and 4 consecutive World golds. The fact that our dream became reality is something none of us will ever forget. We will also never forget the power of a dream. The only thing that could top that would have been the opportunity to play for gold with home court advantage.” 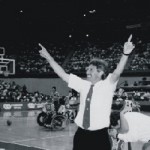 “Thinking back on Barcelona I remember what an incredible experience it was and how the team, as underdogs, really worked together to shock everyone by winning gold. I think we were the only ones who thought we could do it. That win showed us what was possible and over the years as our individual skills got stronger, the foundation of our success was always teamwork.” 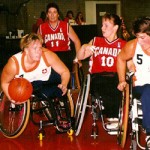 1994: The newly formed Canadian Wheelchair Basketball Association sends a team to Stoke Mandeville, UK (the birthplace of the Paralympics) to compete in the first Women’s World Championships held separately from the men’s event; Team Canada goes undefeated to win gold and their first world championship. 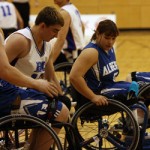 February 19, 1995: The inclusivity of wheelchair basketball is showcased at the Canada Games for the first time in Grande Prairie, Alberta, featuring young men and women, with, and without disabilities competing against each other on the national stage.

“As I reflect upon that time, Wheelchair Basketball Canada, then known as the Canadian Wheelchair Basketball Association, had just incorporated and become recognized as the official National Sport Organization for wheelchair basketball. Reg McClellan, Maureen Orchard and others in the young organization lobbied long and hard to have the sport included in the Canada Games family. This work was groundbreaking on many levels as the event for junior age athletes would feature both young men and women, competing with and without disabilities, together. In many of our minds it was inclusiveness at its absolute best. The tournament was hosted in the pristine mountain community of Jasper, Alberta where the alpine events were held. The community of Jasper was absolutely amazing. Although I honestly cannot remember the name of the winning province, I know that that first inaugural tournament was the beginning of many great careers in the sport and a long working supportive relationship with the Canada Games Council. Many of the young athletes at these Games over the years have gone on to be involved in the sport at many levels, as players, coaches and volunteers. For me, the legacy of the Canada Games is alive and well… in all of us.” 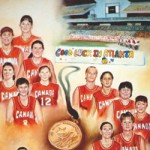 “Our second consecutive Paralympic gold medal performance really raised the bar worldwide for women’s wheelchair basketball. Athletes and coaches in the sport of wheelchair basketball were elevated to a new level of respect within the Canadian sport system and society in general. It was an important chapter in the development of the sport and it was certainly an honour and pleasure to be part of it. And one of the best moments of my life was parading into the Opening Ceremonies carrying the Canadian flag along with all of my amazing teammates. My parents, who supported me 100% every step of my career, and my husband Richard were there to share it with me as well – it is a very special and cherished memory for all of us. ” 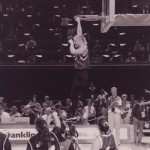 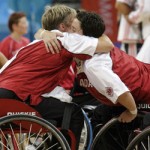 September 27, 2004: Team Canada Women win bronze at the Paralympics in Athens; their loss in the semifinal to the USA was their first at major international competition in 14 years; capping off their incredible winning streak at 36 straight games.

“We were very disappointed in losing to the United States in the semi-finals. We made some mistakes and they capitalized on them. Under head coach Tim Frick, who led the team on our amazing decade-long winning streak, Canada came back with a 63-47 victory over Germany to capture the bronze medal. Our team refocused and decided to show the world that we deserved to be there. Athens marked the end of an era for Team Canada, but the fire still burns bright.” 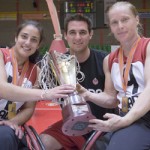 “The 2006 World Championship was an incredible coming together of tradition and innovation. We decided to take our bronze medal in Athens 2004 as a spark: an opportunity to work harder, to grow closer, to deepen our respect for what had worked so well for us over the past 14 years, and to risk reinventing the rest. Through this, we developed a deep trust in each other, and I think that is what pulled us through that multiple-overtime semi-final, and the perennially difficult final match up against USA.” 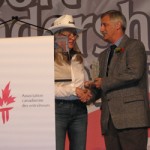 “Tim’s impact on the teams he coached went well beyond x’s and o’s and the numerous medals his teams won. He has an ability to create an environment where the team is clearly better than the sum of the individuals’ abilities. Tim made people want to be better, and we still feel that impact today through all of the people that he influenced in this way. He is also an innovator in the area of sport science, introducing many concepts to parasport that are now commonplace. We are fortunate to have him continuing to contribute to our program and to the sport in Canada.” 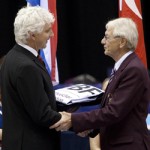 “We had just one year earlier committed to a new vision and strategic plan together with a re-branding of our organization under our new name, Wheelchair Basketball Canada. We were one year out from hosting the first ever Women’s U25 World Championship. We knew in that moment that we would be hosting the first stand-alone women’s world championship in 20 years, and we knew then that the 2014 championship would be the largest ever celebration of the women’s game. I recall that moment as a declaration of both our vision to be the world leader in the sport, and of our strategic commitment to growing and developing the women’s game here at home and around the world. It’s incredibly satisfying now, four years later, to witness Wheelchair Basketball Canada’s realization of all that that moment held.” 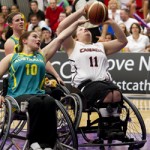 “Being a part of the first-ever Women’s U25 World Championship was something I will never forget. To host the event in Canada and to share it with friends and family was absolutely amazing and a huge honour. We had a very special group of athletes who worked very hard and understood that they were setting the standards for the many women who will follow in their footsteps. This event has paved the way for young women playing in communities all over Canada and who one day will aspire to represent our country.” 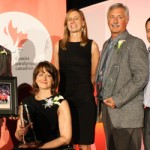 “The induction to the Canadian Paralympic Hall of Fame was not a personal award, but recognition of the tremendous dedication, athleticism and courage displayed by our team over many years. We had world-class support from across the country which allowed us freedom to commit to our collective goal and achieve something so special. It was an honour and privilege to be inducted alongside Tim Frick. He was the unifying force that keep our team together and moving forward to achieve excellence.”