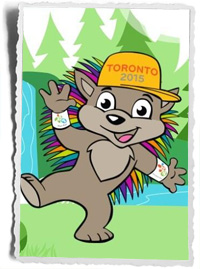 TORONTO, ONT – After months of anticipation, Pachi the porcupine was introduced today as the official mascot for the TORONTO 2015 Pan Am/Parapan Am Games. Thousands of young kids filled the CBC atrium anxiously awaiting their chance to meet the new mascot.

Showing off his friendly, outgoing personality, Pachi took centre stage at KIDS’ CBC DAYS and dazzled the crowd with his brightly coloured quills and his energetic dance moves. With the music of Canadian artist Classified booming, Pachi and young karate athletes got the crowd of kids on their feet, moving to the sounds of Inner Ninja —a song about determination, hard work and inner strength.

Originally designed by a group of four Grade 8 students, Team Porcupine includes Fiona Hong, 13, Michelle Ing, 13, Paige Kunihiro, 14, and Jenny Lee, 13, from Buttonville Public School in Markham, Ontario. The young team entered the TORONTO 2015 Mascot Creation Challenge as part of a school project led by physical education teacher Mari Ellery. The team was challenged to come up with a unique mascot that represented the Games and would be the ambassador for the largest multi-sport Games Canada has ever hosted.

Pachi was selected from the more than 4,000 entries that were submitted by groups of kids from across Canada, and was also the favourite in the online voting contest that received more than 33,000 votes.

Porcupines have more than 30,000 quills, but Pachi has 41—one for each of the Pan American countries participating in the Games. His quills are five brilliant colours and represent qualities that he holds: green is youth, fuchsia is passion, blue is collaboration, orange is determination and purple is creativity. Like other porcupines, Pachi has impaired vision and difficultly seeing people and objects that are far away. He also sports a TORONTO 2015 hat and Pan Am and Parapan Am wristbands.

“We are proud to introduce Pachi to Canadians and people from across the Americas,” said Ian Troop, chief executive officer for the TORONTO 2015 Pan Am/Parapan Am Games Organizing Committee (TO2015). “A lot of hard work and creativity has gone into making this character and Pachi truly represents the spirit of the Games.”

“Mascots are the face of the Games and something that I remember fondly from each of the Games I have competed at,” said Rosie MacLennan, Olympic and Pan Am gold medallist, trampoline. “Pachi is definitely lovable and memorable.”

Mascots are an important ambassador for the Games and a playful way to engage and inspire kids and youth to get active and get involved. Pachi’s unveiling represents a significant milestone along the roadmap to hosting the TORONTO 2015 Games.

“I’m pleased to welcome Pachi the porcupine to the TORONTO 2015 Games family,” said the Honourable Bal Gosal, Minister of State (Sport). “Thanks to the hard work of our young designers we have a unique and friendly ambassador for our Games that Canadians from coast to coast have embraced.”

“Symbolizing the spirit of the 2015 Games, Pachi captures the energy, excitement and creativity of our young people,” said Michael Chan, Ontario Minister Responsible for the 2015 Pan and Parapan American Games. “Pachi will be a great ambassador for the Games, as well as Fiona, Michelle, Paige and Jenny, who I’m proud to say are from Markham, Ontario! Congratulations to all who contributed their creativity in giving the 2015 Games a unique identity.”

Pachi’s character came to life through a series of stages that included the original design from Fiona, Michelle, Paige and Jenny, professional illustration and refinement by renowned illustrator James Caswell and finally costume design by Toronto-based Maydwell Mascots Inc.

“Our group was called the Pachi Pals because we thought the name was so cute,” commented Jenny. “And now kids from across Canada and the Americas can be Pachi Pals too!” 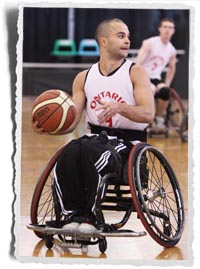 “Meeting Pachi today was another one of those memorable moments and I can’t wait for the other athletes to meet him in 2015,” added Tyler Miller, Paralympic gold medallist and Parapan Am bronze medallist, wheelchair basketball.

People can meet Pachi online at TORONTO2015.org/mascot. The website features information and news about Pachi, fun downloads such as colouring pages, photos and videos as well as stories of his travels in The Mascot Diaries.

Beginning tomorrow, Pachi will make appearances in communities across the Games footprint as the ambassador for the TORONTO 2015 Pan Am and Parapan Am Games. He will be back at KIDS’ CBC DAYS in Toronto on Thursday, July 18 from 10:00 a.m. to 3:00 p.m.  For a list of Pachi’s upcoming appearances or to request him to attend your event, visit TORONTO2015.org/mascot.