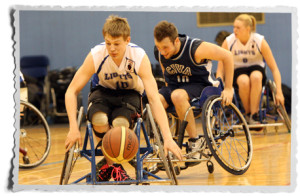 (Montreal, QC) The first day of fiery competition is in the books at the 2013 Canadian Wheelchair Basketball League (CWBL) Open Championship at the Centre Pierre Charbonneau in Montreal, QC.

In a clash of Quebec club teams, the Gladiateurs de Laval defeated CIVA 80-44 in the opening game of the day.

Montreal’s David Eng scored a monstrous 40+ points in the victory for the Gladiateurs. The top scorer for CIVA was Benjamin Palmer with 13 points.

The Bulldogs de Quebec began their quest for gold with a 59-41 victory over the Nova Scotia Flying Wheels.

The BC Royals were crowned victors in their first game of the tournament with a 62-54 win against Saskatchewan’s Club ’99.

Kevin Bowie tallied 21 points for the Royals and teammate Ross MacDonald contributed 17 points to the winning effort. Blaine Hancock led the way for Club ’99 with a game-high 23 points.

CIVA picked up a win in its second outing of the day by defeating the Alberta Northern Lights 55-54 in a hotly contested match.

The Palmer brothers – Benjamin and Nicolas – were the offensive catalysts for CIVA with 19 and 18 points, respectively. Ben Moronchuk led all players with 22 points for the Northern Lights.

The Nova Scotia Flying Wheels rebounded in the afternoon to earn their first win by defeating Club ’99 55-52.

Adam Lancia led the charge for the Flying Wheels with 30 points while Blaine Hancock delivered another solid performance for Club ’99 with a 24-point effort.

The Bulldogs remained undefeated after capturing an 81-64 decision in an afternoon tilt against the BC Royals.

Last year’s tournament MVP Maxime Poulin was a force to be reckoned with for Quebec, as he posted a game-high 36 points. Kevin Bowie led the BC attack with 29 points.

The Gladiateurs de Laval put the finishing touches on day one with a decisive 85-53 triumph over the Alberta Northern Lights.

The top seven competitive wheelchair basketball club teams in Canada are competing for the title of national champion.

Preliminary round action resumes at 9 a.m. (ET) on Saturday with the semi-finals taking place in the afternoon. The bronze and gold medal games are set for Sunday, April 14, 2013 beginning at 10 a.m. (ET).