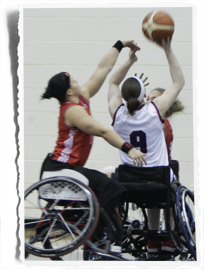 (Toronto, Ont.) The USA and the Netherlands closed the Toronto Challenge with wins against Canada and Great Britain in the final games of women’s wheelchair basketball on Sunday at the Mattamy Athletic Centre.

Rivals Canada and the USA faced off for a thrilling rematch in the opening game of the night. The game opened with an intense pace, the teams matching each other shot for shot, however the Americans managed to gain a 10 point lead by halftime. In the second half the Canadians were once again outscored and trailed the Americans for the remainder of the game. The final score was 74-47 in favour of Team USA. American Rose Hollerman led all players with 23 points, while Cindy Ouellet and Arinn Young led the Canadians with 14 and 13 points, respectively.

The Netherlands had established themselves as the team to beat in the Toronto Challenge and they remained undefeated in the final game of the friendly tournament. Although the Brits opened the game with a strong defensive game by minimizing offensive rebounds, they were unable to keep up with the Dutch. The Netherlands secured the win 72-46 over Great Britain. Mariska Beijer secured 34 points for the Netherlands while Amy Conroy led Great Britain with 16 points.