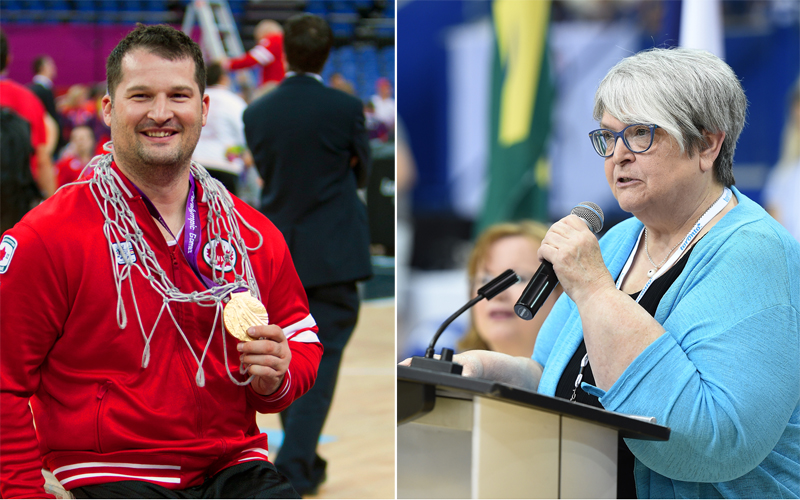 “We are absolutely thrilled for Joey and Kathy and proud to see their immeasurable contributions and outstanding achievements be enshrined in the Canadian Paralympic Hall of Fame,” said Wheelchair Basketball Canada Executive Director Wendy Gittens. “They are two of the finest leaders and trailblazers in the Canadian wheelchair basketball community. Both have left an indelible mark on the sport and personified excellence throughout their accomplished careers.”

Johnson and Newman will be inducted alongside athletes Colette Bourgonje, Josh Dueck, Viviane Forest and Garett Hickling, and coach Joe Rea at the Canadian Paralympic Hall of Fame gala on November 15 in Vancouver.

Johnson was one of the premiere power players in the world and an absolute workhorse on the court throughout his 18-year career with the Canadian Men’s National Wheelchair Basketball Team. He is one of the most well respected individuals in the game for his work ethic, the intensity with which he played, and the manner in which he carried himself on and off of the court.

A native of Lorette, Man., Johnson’s list of accolades includes three Paralympic gold medals and one silver, a senior and junior world championship title, and countless national, collegiate and league championships within Canada and around the world. Whether he was competing on behalf of his country, his home province, his college or his club team, Johnson has made an impact and found success at every level at which he has played.

5 athletes were announced to join the #CPCHallofFame. Those 5 athletes together represent 27 medals throughout the history of the Paralympic Games. Join us in Vancouver on Nov 15 as we officially welcome the 2019 inductees to the CPC Hall of Fame https://t.co/7cVaNDMQrE pic.twitter.com/NuxLts2Env